Patrick became a suspect after team found his notebook on a crime scene.He said that he and mayor Martha Price were invited to the premiere,so he wanted to take a picture with Grayson Tatum and forgot his notebook there.

In the middle of investigation,Patrick came into Laroy Bay Police Department station drunk.He said that Grayson was the one who ruined his life,along with his brother Adrian Fishman and started crying.When team questioned him why,he said that Grayson was the one who accidently killed their father,but covered up his crime from whole world thanks to his lawyer,causing Patrick and Adrian to grow up without their father,but Adrian believed that Grayson didn't want to do it,so he helped him to cover up his crimes,making Patrick mad.

Patrick was found innocent after team arrested Amanda Love for a crime.

In AI,Adrian Fishman came to station,telling team that Patrick has gone missing.Last thing he left before dissapearing was a note written in blood.It says ''NEW LAROY BAY ORDER''.Rosie Summers analyzed the blood and it was his blood.Team thought that he is in danger,and went to save him,but they got another murder report.

Patrick was spoken to after team found his badge in Gillenati's cave,meaning that he was there and he didn't told them.He said that he doesn't remember being there and that he must have been brought there while he was knocked out.

Patrick was interrogated again after team found selfie of him and Aubrey on her phone.He said that he knew her for a while and that they were very good friends.

Patrick became a suspect after team found his credit card on crime scene.He said that he was invited on wedding because he knew Dalia from his childhood.When team told him that she was killed,he was horrified that someone would kill a girl in such a gruesome murder.

Patrick was spoken to after he found Dalia's head in local church.Patrick said that he was passing by,when he noticed a head next to entrance,He immediatly called the police.

Patrick was found innocent after team arrested Abby Beaty for a murder.

In AI,Patrick came to station saying that his brother Adrian Fishman gave him pretty weird and creppy letter where he threatened him.There was something about ''Big Lord'' mentioned but in Latin.Giulietta Gimondianalyzed the paper and confirmed that writing on this letter belongs to Adrian Lynn and that Latin sentence is ''A solis ortu usque ad occasum'' and that means ''From sunrise to sunset''.

Up in the Air

Patrick became a suspect after team found his handwriting in victim's diary.He said that he was good friends with Twan and that they went to high-school together.

Patrick was spoken to again after team found roaches in candy box he sent to victim.He said that Twan hated roaches so he wanted to pull a prank on him for old good days and nothing more.

Shockingly,Twan's killer was revealed to be Patrick.

Admitting to the murder,Patrick said that his fiancee had gave a birth to beautiful baby girl called Harriet.However,she got kidnapped 2-3 days ago.Nobody could find her,even the police.One day,Patrick heard Twan talking about baby project and he claimed that he took Patrick's daughter for a baby project.Patrick was driven insane,so when he saw Twan on a plane,he sabotaged plane's toilet and wanted to interrogate Twan about his daughter by threatening to drown him in water.Twan refused to tell anything,making Patrick mad,so he knocked him out and drowned in a toilet.Judge Eva Rose sentenced Patrick to 15 years in prison.

As High as Sky

All Eyes are On 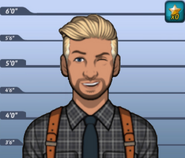 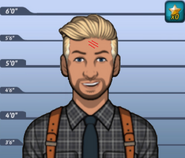 Patrick, as he appeared in Beat your Breast (Case #42 of Laroy Bay). 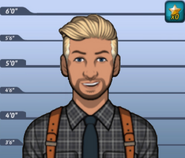 Patrick, as he appeared in Head Over Heels (Case #45 of Laroy Bay). 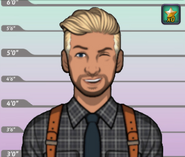