Parker Colton is a main character featured in Criminal Case Secrets of Yahatu, where he served as the Yahatu Archaeological Association‎'s investigator.

Born in a small forest village in Oregon, Parker is a 19-year-old archaeologist and investigator with short, messy blond hair and green eyes. He is seen wearing a pale yellow unbuttoned shirt, black jeans and black boots.

Parker is known to be clumsy, playful and sweet. He accidentally set his village on fire when he was 10. Additionally, he once almost murdered the entire team when he accidentally activated hidden traps in an Aztec temple.

In his suspect appearance, he wears a black leather jacket.

In his second suspect appearance, he has bruises on his forehead and his chest.

The player may choose Parker to join the investigation of each crime scene (in any Secrets of Yahatu cases in which he teams up with the player) and provide hint bonuses. He is available as a 1-hint, level-10 partner. 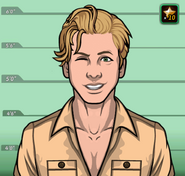 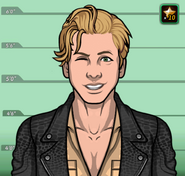 Parker, as he appeared in The Blade of Life (Case #29 of Secrets of Yahatu).
Add a photo to this gallery
Retrieved from "https://criminal-case-official-fanfiction.fandom.com/wiki/Parker_Colton?oldid=252689"
Community content is available under CC-BY-SA unless otherwise noted.