Paolo Monti was the victim in The Spin of Destiny (Case #8 of Pheadmouth).

Paolo was a gambler with blue eyes and short brown hair underneath a straw hat. At the time of his death, he was seen wearing a white shirt underneath his green waistcoat and black bowtie.

The killer turned out to be his wife, Violetta Monti.

Admitting to the murder, Violetta explained that the victim had acted suspiciously recently, saying that he was like a womanizer and almost never came home. She then decided to visit the casino where her husband was working to invesigate. However, Violetta was then shocked after she caught him and Grace having an affair. Being frustrated, Violetta pretended not to know anything, she then called the victim to the casino, asking him to play a roulette spin with her. After the game was over, Violetta started to hit Paolo with a glass bottle. Judge Park sentenced her to 20 years in prison. 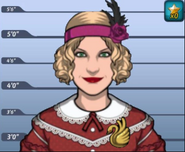 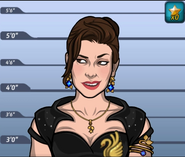 Grace O'Brien, Paolo's girlfriend.
Add a photo to this gallery
Retrieved from "https://criminal-case-official-fanfiction.fandom.com/wiki/Paolo_Monti?oldid=114628"
Community content is available under CC-BY-SA unless otherwise noted.