When sent to autopsy, Hasuro found glass shards on her body, this in addition to her dying by burning, confirmed that she was killed by a molotov cocktail. Considering molotov cocktails are not sold, Sploder confirmed the victim made, which needs skills in chemistry, revealing that the killer knows chemistry.

Ezekiel turned out to be the killer. After trying to deny it, he admitted it after all, he told Mia and the player he never meant to kill Nodoka, and it was their fault. He told them that he was sick to the police coming to him confronting him about a robbery he never took part in, so after he saw Nodoka running away, he knocked her out, brough her to a shed, and used his chemistry skills to make a molotov cocktail. When she woke up, he started a recording on his phone, and threatened to throw the murder weapon at Nodoka if she does not reveal the name of her accomplice, but never really wanted to do so. Eventually Nodoka got mad, and kicked Ezekiel, where he accidently dropped the weapon, and he had to escape, while Nodoka died. Judge Powell sentenced him to 10 years in prison.

At the end of the case, Nodoka infomed the player and Mia that a robbery happened in the Grimsdale Bank.

She was later spoken to again, after the team found out that the victim had a crush on her, where Nodoka claimed that the victim was obsessed with her, and even pinched her bottom.

After collecting enough evidence, the team arrested her for the crime, she denied it, but later confessed. She said that she killed to silence her after she caught her robbing the bank, and explained that her job as a cop didn’t give her a lot of money, and that she wanted to live the flashy life, like the one celebrities do, so she made up a plan, and broke into the bank to steal as much money as she can, but the victim saw her, so she shot her on the head. Judge Powell did not like what she heard, and sentenced her to life in prison with no parole, for being a dissapointment to the Justice system.

The team later discovered that she was not alone during the robbery, and that someone helped her as well. When confronted about that, she denied it, but after being shown some proof, she admitted that she didn’t rob the bank alone, in fact she was just a bodyguard to the real robber, to put down any witnesses. When asked who was her partner, she refused to say a word, saying that it is the “team’s punishment” for putting her behind bars.

The team decided to go by Hamida’s plan, disguising Adrian as a prison guard, to fool Nodoka into escaping and attach a tracking device on her hair, to fund out where the money is hidden. 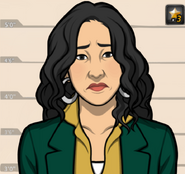 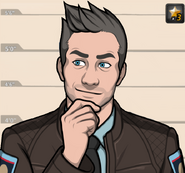 David Jones.., Nodoka’s uncle-in-law.
Add a photo to this gallery
Retrieved from "https://criminal-case-official-fanfiction.fandom.com/wiki/Nodoka_Kusama?oldid=125444"
Community content is available under CC-BY-SA unless otherwise noted.