Noby Foreman (1993–2019) was a suspect in the murder investigations of his fiancée, scuba diver Susie McAlister, in Back to Water (Case #8 of Alpha Bay) and his ex-girlfriend, scuba diver Valerie Green, in Radioactive Party (Case #12 of Alpha Bay) before being murdered in Destructive Experiments (Case #14 of Alpha Bay).

25 years of age, Noby was a mathematician and the leader of Watery Systems with short brown hair and blue eyes. He was seen wearing a black shirt with white buttons and a pair of black glasses. His shirt had two pockets one of which carried his phone.

In his first appearance, it was known that Noby was skilled with a crossbow, played bingo and used hand sanitizer.

In his second appearance, it was revealed that he had lock picking skills.

The killer turned out to be hacker Arif Hassan. 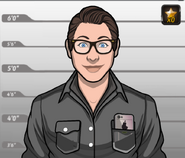 Noby, as he appeared in Back to Water (Case #8 of Alpha Bay). 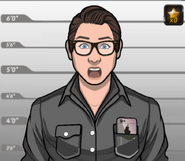 Noby, as he appeared in Radioactive Party (Case #12 of Alpha Bay). 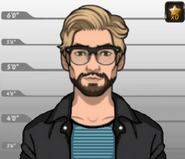 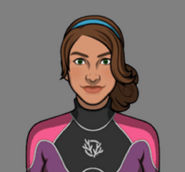 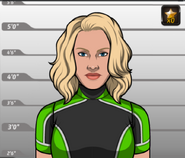 Valerie Green, Noby's late ex-girlfriend.
Add a photo to this gallery
Retrieved from "https://criminal-case-official-fanfiction.fandom.com/wiki/Noby_Foreman?oldid=221796"
Community content is available under CC-BY-SA unless otherwise noted.