Nina was a 21-year-old student with long wavy brown hair and black eyes. At the time of her death, she wore a bee costume with black-orange stripes and orange wings.

Nina was found tied up and impaled on Judas Cradle.Aiden that she was knocked out 2 times,first with wood object,probably a bat,but then she woke up so the killer used a plant vase to knock her out again.The extreme pain from top of Judas Cradle impalaling her probably woke her up.He also found a spirit board pointer tied to her hand.The killer could only have this pointer if they use spirit board which means that the killer is using spirit board.

The killer was revealed to be bartender Tamra Cohen.

Admitting to the murder, Tamra said that she wanted to find out where Nina's great-grandfather was buried. She then explained that she only tried to convince Nina into talking, not wanting to kill her. When team asked her why she wanted to know Nina's great-grandfather's burying place, she refused to reveal anything. Judge Park sentenced Tamra to 65 years in prison for Nina's murder and her not revealing the motive for the murder. 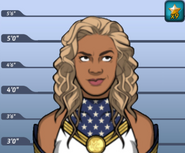 Tamra Cohen, Nina's killer.
Add a photo to this gallery
Retrieved from "https://criminal-case-official-fanfiction.fandom.com/wiki/Nina_Goodwin?oldid=100712"
Community content is available under CC-BY-SA unless otherwise noted.