Nathan Hardwin, appearing as a recurring character in Criminal Case Return to Laroy Bay, was a suspect in the murder investigations of two people before killing LBPD tech expert Juniper Cooper in Win the Battle,Lose the War (Case #36 of Laroy Bay). After getting released from prison, he appeared as a suspect in the murder investigation of five different people.

Nathan is a 25-year-old student and gang member with short spiky brown hair and brown eyes. He wears a green buttoned shirt, brown backpack and an opal earring.

Nathan became a suspect after his saliva was found on victim's cigarette pack.He said that Tarik Reem was good man and that they had one argument where he spat on him,but it was fine

Nathan was interrogated again after team found picture of him and his ex-girlfriend in Tarik's bag.He said that his ex is Tarik's niece,but Tarik convinced her that Nathan is classic womanizer and that she should break up with him what she actually did.

Nathan was found innocent after team arrested Debby Pembroke for a murder.

Give Me Your Hand

Nathan became a suspect for second time after team found family picture including him and victim Nora Hardwin.He said that she was his little sister and he started crying saying that whoever killed her will pay.

Nathan was spoken to again after he tried to commit suicide by throwing himself in river because his sister is dead and his parents are fighting for their lives at hospital.Team managed to convince him to come with them.

Nathan was found innocent after the killer is revealed to be Ethan Nock.

Nathan was interrogated in AI only to be warned about Tobias's assasin.He said that he will warn Daria and every Tech Town Tiger.

Nathan was spoken to after his wallet has been found on crime scene.He said that he dropped his wallet there and thanked player for returning it to him.He claimed that he doesn't even know who Juniper is.

Nathan was interrogated again after team found his sketch of Juniper.He said that he fell in love when he first saw her,but she rejected his offer.

Later on,the assassin was proved to be him.Nathan tried to deny involovment,but he eventually confessed.He said that Tech Town Tigers were weak and that he truly believed in Melbury Cobras whole time.Tobias told him to murder Marcus and player if he wants to join them.Since it was unsuccessfull,Nathan tried to think another way of proving that he is worthy.He heard Juniper telling Angie that she is going to warn Daria herself,so he grabbed sniper rifle,found biggest building near Tech Town Tigers base and shot Juniper when she arrived.Judge Eva Rose was shocked because Nathan showed no remorse for killing innocent police agent who tried to save lives of Tech Town Tigers.

Nathan was sentenced to life in prison with no chance of parole for murder of Juniper Cooper and attempted murder of Marcus and player.

In AI,team questioned him about Gillenati,secret cult he had affilations with.He said that Gillenati have bigger plans for Laroy Bay then Melbury Cobras did and that they will create a ''New Laroy Bay Order''.Later on,Gillenati's leader was revealed to be an actress named London Garcia so team went on her new movie set to talk with her.

Run in the Blood

All Eyes are On 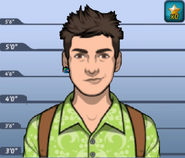 Nathan, as he appeared in Painball (Case #33 of Laroy Bay). 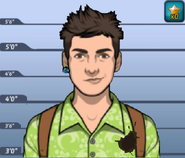 Nathan, as he appeared in Give Me Your Hand (Case #34 of Laroy Bay). 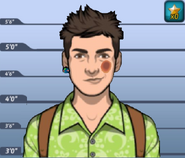 Nathan, as he appeared in Win the Battle,Lose the War (Case #36 of Laroy Bay). 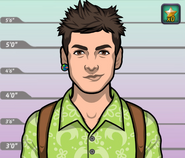