Michael McKenzie, appeared as the main character of the series Concordia Flying Squad, and was the central subject of every season, appearing as a suspect many times across Concordia and Astodia.

In the beginning appeared as a 14 year old orphaned child, with dirty brown hair and a ruined brown jacket, but under the tutelage of Lance Carmichael, grew up to be a renowned success, in his current stage he is a 38 year old detective and Nuevo's only High Class Agent, a rank falling only centimetres of Deputy Chief, he now wears a white shirt with light blue tie and a beige waistcoat, with brown suspender, along with a black bowler hat with a grey stripe, along with this he wears a pocket-watch with a picture of his idol Jason Byrd inside.

May God Have Mercy

Michael made several unnamed appearances prior to this but officially made his presence known by appearing before Benjamin at his Nullville throne, after exclaiming a few words, Benjamin found in Michael a reason to come home, officially welcoming Michael as his Protege.

Michael appeared once again to give Lance encouragement before his big showdown with El Rey.

Michael officially became a suspect of being SOMBRA's leader, and all seemed bad until Benjamin Jameson was named as El Rey.

End of the Line

Michael appeared in the aftermath of the murder investigation of Benjamin Jameson, joining Lance and the team as they left Concordia and the CPD behind, heading for Astodia, Russia.

A Shadow of a Doubt

Michael was diagnosed with Sociopath Syndrome in the aftermath of the Shadow's showdown, which explained why he was able to almost murder the Shadow without a second thought, he then took over as Chief of the CPD after Ex Chief Topher Darrenvage's test was complete.

As of now, Michael is working with the Nuevo Flying Squad to investigate the mysterious Market Wall Co, responsible for mass revival of the dead, and the Shadow, also known as the killer of Katt Venus's parents.

As the main character Michael appeared in every case after Case #56. 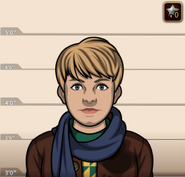 Michael as he appeared during Rising Shadow. 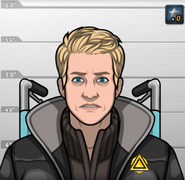 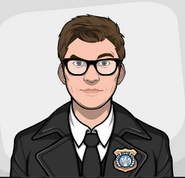 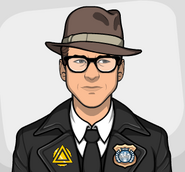 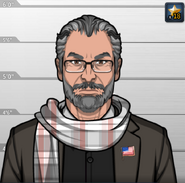 Topher Darrenvage, Michael's biological father.
Add a photo to this gallery
Retrieved from "https://criminal-case-official-fanfiction.fandom.com/wiki/Michael_McKenzie?oldid=64933"
Community content is available under CC-BY-SA unless otherwise noted.