Merak Wood was the victim in In These Murderous Times (Case #20 of Parinaita).

Merak was found in the Prince's tower with a huge heart where his chest should be, it wasn't clear what murdered him until the team found a laser cannon.

Merak's killer turned out to be Alice Winchester

"Alice said that she didn't murder anyone and was annoyed by the team's baseless accusation, the team then told her everything that proves that she was the killer, in a fit of rage, she admitted to the murder saying that someone gave her the strange cannon, when ask who this person was, she didn't know because their face was covered up, she didn't understand why she got the cannon until a few days later where the victim and her got into a fight over the cannon and then it shoot a strange light cannon ball right through his chest. Realising it was an accident, the team send her to be sentence" 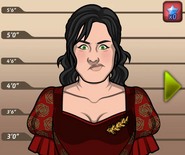 Alice Winchester, Merak's killer.
Add a photo to this gallery

Retrieved from "https://criminal-case-official-fanfiction.fandom.com/wiki/Merak_Wood?oldid=175299"
Community content is available under CC-BY-SA unless otherwise noted.