Maxwell "Max" McKenzie (1983-2022) was a main character featured in Season 3 of Criminal Case, where he served as the Flaming Eagle Police Department's Profiler.

He became a suspect in the murder investigation of Lynch heiress Kaitlynn Lynch in Crime of My Life (Case #19 of The Mystery) before he was then murdered in The Sacrifice of the Light (Case #66 of The Mystery).

Hailing from Ottawa, Canada, Maxwell is the 38-year-old profiler of the Flaming Eagle Police Department who worked as a school therapist prior to his tenure in the department. He is a tall and stocky man who has fair skin, curly red hair and green eyes concealed behind a pair of black aviator glasses. He normally sports a blue shirt with pockets and a red POLICE cuff, as well a navy blue tie with blue polka dots. He is also seen wearing a rose brooch and has a scar between his eyes. 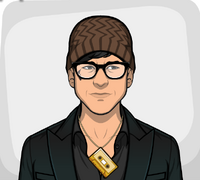 Retrieved from "https://criminal-case-official-fanfiction.fandom.com/wiki/Maxwell_McKenzie?oldid=218830"
Community content is available under CC-BY-SA unless otherwise noted.