21 years of age, Martin is an astrophysics student studying at Fario University. He has dyed silver hair and blue eyes. He is seen wearing a dark green collared shirt with two pockets, one of which carries his phone.

In his first appearance, it is known that Martin knows mechanics and practices archery.

In his second appearance, it is revealed that Martin has been to Las Vegas, has an underskin chip and reads 1987.

In his third appearance, Martin sports a golden drangonfly brooch on the right side of his shirt. It is noted that Martin eats sushi, knows Morse code and is right-handed.

In his fourth appearance, he ditches his brooch and sports a bruise on his right cheek and a sunglass on his shirt. It is learnt that Martin uses lip balm, sings and smokes, although he smoked only twice (one out of curiosity and the other only to annoy the team).

In his fifth appearance, his bruise gets healed. It is determined that he has a pet alligator, has access to the restricted area and is insomniac.

Martin was flagged as a suspect after Barb and the player discovered that it was his car which was used to kill Carlos. Shortly after, he was interrogated again after it was revealed that he threatened Carlos multiple times. He said that he reported the police about his shady activities but nobody ever listened to him. So to keep Carlos away from him, he used to send him threats.

Martin was found to be innocent after Georgina Smith was incarcerated for the murder. Post-trial, when Felix Dunlap was interrogated, he said John and the player that he was near to uncover the child kidnapper's real identity, but for that he needed access to Martin's garage. Felix, being exhausted, added that when he asked Martin to search his garage, Martin simply kicked him out. Being suspicious, the team searched the garage and found Martin's laptop containing a lot of pictures of Carlos and his son. The team went to interrogate him where they found Martin and Carlos' son together. Martin apologized for hiding information and said that he couldn't let Carlos' son be a cheater and thief like his father and that's why he used to stalk Carlos. Martin added that he somehow discovered that Carlos was in a kidnapper gang a few years ago, which made him worried about Carlos' son.

What Happens in Fario, Stays in Fario

Martin returned as a suspect after Barb and the player found a strange weapon belonging to him. When asked about the gun, he said that he was supposed to sell the gun to Eugene. However, as he was dead, Martin easily understood that that would never happen.

Martin was spoken to again regarding his secret project about Eugene. When the team questioned him about the project, he said that he knew the event had made him suspicious, and that he was aware of Eugene's affilation. He continued by saying that he would never trust anyone connected to LEGION, and that that was the reason behind his secret project.

Martin was found to be innocent after the team arrested Jennifer Tanaka for the murder. Post-trial, Mia and the player questioned Jennifer after finding Felix's USB stick which contained information about the golden hourglass which Ben Davenport mentioned during his arrest. However, Jennifer admitted that Felix had questioned her about the hourglass and that the story of that was true. She then said the team that only Stella Gibbs had access to the hourglass and that they should talk with Martin, as he was close with Stella. When asked about his relationship with Stella, Martin admitted of being close with her and said that she had invited him to join LUMIA so that he, along with 31 other "chosen" people, could be immortal and rule over not only America but also over the world. Anyway, despite being a good friend of Stella, he rejected her offer as she had teamed up with shady people like Ben Davenport and a teenager with a commanding voice. Anyway, the team then returned to the station as both of them were no longer alive.

Iced to the Core 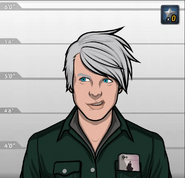 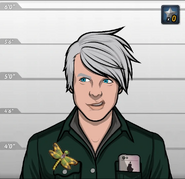 Martin, as he appeared in Teacher's Death (Case #25 of Secrets from Beginnings). 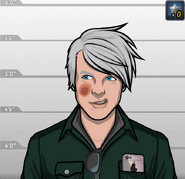 Martin, as he appeared in Learn by Heart (Case #30 of Secrets from Beginnings).
Add a photo to this gallery
Retrieved from "https://criminal-case-official-fanfiction.fandom.com/wiki/Martin_Taylor?oldid=231603"
Community content is available under CC-BY-SA unless otherwise noted.