Marcus Young is a main character in Laroy Bay and Return to Laroy Bay, where she serves as the chief of Laroy Bay Police Department in both seasons.

He appeared as a suspect in the murder investigation of skater Dustin Vega in A Shape of Betrayal (Case #30 of Laroy Bay) and former profiler Josh Knight in The End of Times (Case #56 of Laroy Bay).

Marcus is a 28-year-old detective with short spiky blonde hair and green eyes. He wears a light brown jacket and striped dark brown T-Shirt underneath it. He also sports glasses.

Marcus is known to be clumsy and friendly. In his free time, he enjoys spending time with his baby son and his fiancée Megan Alan.

The player may choose Marcus to join the investigation of each crime scene (in any Return to Laroy Bay cases where he teams up with the player) and provide hint bonuses. He is available as a 1-hint partner. 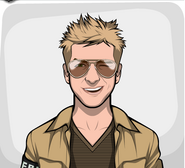 Marcus, as he appeared in A Shape of Betrayal (Case #30 of Laroy Bay). 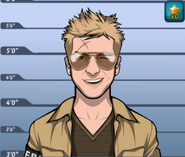 Marcus, as he appeared in The End of Times (Case #56 of Laroy Bay).
Add a photo to this gallery
Retrieved from "https://criminal-case-official-fanfiction.fandom.com/wiki/Marcus_Young?oldid=193998"
Community content is available under CC-BY-SA unless otherwise noted.