Mandy is a 36-year-old Mayor of Venusville. She has long, wavy ginger hair and brown eyes. She wears a peach blouse with a pink, burgundy, and white floral pattern, and a peach bow.

In her second suspect appearence, she wears a blue badge. 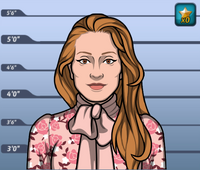 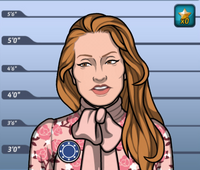 Mandy, as she appeared in Final Destination (Case #54 of Venusville). 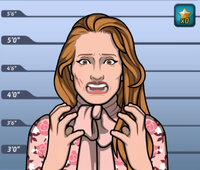 Mandy, as she appeared in An Icy Inferno (Case #60 of Venusville).
Add a photo to this gallery
Retrieved from "https://criminal-case-official-fanfiction.fandom.com/wiki/Mandy_Pregodich?oldid=192979"
Community content is available under CC-BY-SA unless otherwise noted.