Major Lucas is a main character featured in Season 1 and Season 3 of Criminal Case, where he serves as the Flaming Eagle Police Department's Senior Detective after having served as a Junior Detective in the first season.

He was a suspect in the murder investigations of his mother, Marie Redmoon-Bilodeau in A Moon of Blood (Case #26 of Rosenoque) and his father, escaped convict Francisco Redmoon in Plans Badly Executed (Case #53 of Rosenoque). He later became a suspect in the murder investigation of DJ Abdul Carla in The Legends of Reality (Case #26 of The Mystery)

Hailing from Québec, Canada, Major is the 24-year-old detective of the Flaming Eagle Police Department who is assigned to be one of the two partners for the player's career in the Flaming Eagle Police Force and worked as an animal ranger prior to his tenure in the department. He is a medium-sized man who has fair skin, brown hair and brown eyes. He normally sports a red top under a brown fur coat with a beige fur collar adorned with brown fur and silver linings. He is seen wearing a dark beige cowboy hat with a brown band and has a series of scratches on the left side of his neck. Other than that, he wears an eagle pin and a bead necklace with a sword charm and a dog tag attached.

Now 27 years and a senior detective in the Flaming Eagle Police Department, Major has retained his cowboy hat and necklace. However he is now seen in a green shirt under a beige sweater with red, green and white sleeves and linings, black moose heads on his chest and a silver maple leaf zipper.

Major is known as a humorous and slightly childish person but nevertheless, he gets the job done with his fellow teammates. His hobbies are known to be tending to animals and eating. He however has a weakness for canines. His favourite food is known to be cookies and his favourite animal is the wolf. Furthermore, now married to Summer Murphy, it is known that he has promised to never becomes a monster like his father was.

Per his first suspect appearance, it is noted that he is contact with wolves and speaks French.

Per his second suspect appearance, it is noted that he eats spaghetti, drinks Frosty slushies and that he is left-handed.

Per his third suspect appearance, it is noted that he has read the Redmoon-Blade legend, eats foie gras and knows anatomy. 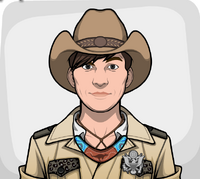 Major, as he appeared in Threat from the Past (Case #45 of Rosenoque) 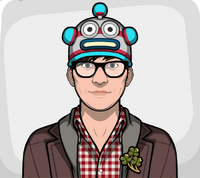 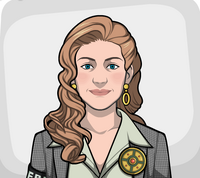 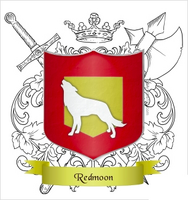 The Redmoon crest badge.
Add a photo to this gallery

Retrieved from "https://criminal-case-official-fanfiction.fandom.com/wiki/Major_Lucas?oldid=229272"
Community content is available under CC-BY-SA unless otherwise noted.