Agent Luka Pericich was the victim in Red Alert for Detectives (Case #21 of Alpha Bay). After turning into a cyborg, he killed the creator of his cyborg form, Belarusian programmer Egor Novik, in Turning Fiction into Reality (Case #26 of Alpha Bay). Later, he was freed by Cascade in The Crimes of Cascade (Case #46 of Alpha Bay).

As a human, Luka was an undercover ILED agent working for Darkmoon Incorporated under the disguise of a researcher with green eyes and short black hair with a blue tip on his left. At the time of his death, he was seen wearing a white shirt and a green tie.

After turning into a cyborg, his left arm turns metallic as well as his right eye becomes robotic and purple, while his mouth also turns robotic. He also sports an eyepiece over his left eye.

In his suspect appearance, he sports two blue glowsticks around his neck. It is known that Luka uses energy pills, knows robotics and watches Star Wars.

The killer of Luka's human form turned out to be Darkmoon Incorporated's head researcher Diane Ivans. 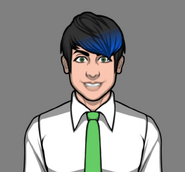 Luka, as he appeared in Red Alert for Detectives (Case #21 of Alpha Bay). 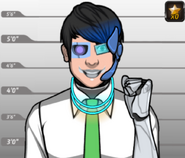 Luka, as he appeared in Turning Fiction into Reality (Case #26 of Alpha Bay). 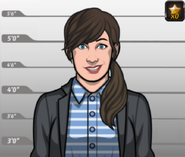 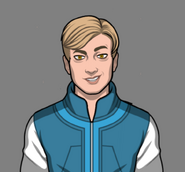