Loup Hunt, acting as a reccuring character in Harwell, was a suspect in the murder investigation of anarchist Merlyn Rake in Dread in the Air (Case #13 of Harwell), janitor Stan Norman in Evil Inside Out (Case #16 of Harwell) and famous businessman Mason Indigo in Their Fall's First Strike (Case #29 of Harwell). He also appeared as a quasi-suspect in Blaze of Glory (Case #17 of Harwell).

Loup Hunt is a 19 years old Soulbound Highschool student with brown hair with dyed blue tips and brown eyes. He is seen wearing an orange shirt under a dark grey and black striped jacket with black linings and buttons, as well as a white PS sewn in on his left breast. He also has a mosquito bite on his left cheek and on the right side of his neck.

In his first suspect appearance, it is known that he eats ginger and wears hiking boots.

In his second appearance, he is seen wearing a red swimsuit with dark red and white linings. It is known that he believes in the supernatural, uses permanent markers and drinks ginger beer.

In his quasi-suspect appearance, he returns to his original outfit which has a mud stain and is torn on the left side. Furthermore, he has multiples scars and bruises over his body.

In his third suspect appearance, his clothes are restored and clean as the scars, bruises and mosquitoes bites have healed. It is known that he is allergic to seafood and eats pumpkin soup. It is also learned that he wears a watch.

Dread in the Air

Loup first came into suspicion when the team found his student ID on the camping site. The young man explained that he usually walk around the site when he has a few minutes as he likes to go talk with the campers. When asked if he knew the victim, anarchist Merlyn Rake, he denied knowing her and was quite surprised to hear of a murder in the forest although he is aware of the district's reputation.

The student was interrogated again after the duo found his creepy drawing representing a demonic-looking cult doing some kind of ritual. He explained that it wasn't some cult, but The Soulless Shadows and that he was just interested in the stories behind it. When asked why his notebook wasn't with him, the boy said that the victim had taken it, threw it away and told him that he shouldn't waste his precious baby time with such scary thing and just stick with toys cars, angering him. In revenge, he kicked the victim with his hiking boot before running away.

Loup was found innocent of the murder after the team arrested camper Lucy Devine for it.

Loup Hunt became a suspect again after the team found his cap at in the school theater. The student was surprised to see them in the school and asked what were they doing here. In response, Anthony shown him a picture of the victim, janitor Stan Norman and asked if he knew him, on which Loup was surprised to hears of the murder. When asked if he knew anything about the murder, he responded that the janitor was creeping him out but that he never though someone would kill the guy and for what reason they would have. He then excused himself as he had to hurry to his next class before running off.

He was brought back into suspicion as the team found a questionable story written by him about evil hiding while disguised under human appearance. Upon hearing it, he excitedly asked if they had liked it and said that he had gotten that idea from the janitor who he suspected to be one of the evils. When asked why, he responded that the janitor would look at girls in a strange way and had threatened him that if he would speak about it, he would ruin his life. Loup then finished by saying that the janitor got what he asked for and that he would have liked to see if there was, indeed, a evil entity inside of him.

Loup was found innocent once more as the team arrested witchcraft enthusiast Sylvia Lawson for the murder. Later, although not mentioned directly, he was kidnapped by The Soulless Shadows.

After Kathy Webb accepted to help the team, they successfully found the tied up Loup. After rescuing him, he thanked the team millions of times but had no ideas why the cult would have wantedd him in particular except for his interest in it and was just graceful to be alive.

Loup reappears again in the murder of businessman Mason Indigo when the team found his travel guide. After making sure the young man was alright and asked what he was doing in Indigo Banks, he explained that his family and him were exploring the multiples famous sights of Harwell. Upon being asked if he knew the victim, he was surprised to know that such a man could be killed and sadly told the team that he had never really met him. He then said he had to rejoins his family and that if they needed to speak to him, they could come at the hotel where they were staying.

The student was brought back when the team found his broken watch. When asked how it got broken, he explained that he had lied about not having met Mason and told them that this businessman had broken it. He went on to explain that, in mister Indigo's eyes, he shouldn't be treated like a human due to him being "a simple student who can't live to my life standards", calling him poor and fragile due to him having been kidnapped. An angry Loup Hunt then told the team that the victim was a greedy idiot and that he had no right to treat his family like garbage as they weren't poor. Brooklyn then told him that she wishes that he didn't murder him for that.

Even after his outburst about the victim, Loup was found innocent for the third time after bank owner Roger Archer was arrested for the murder. 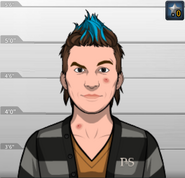 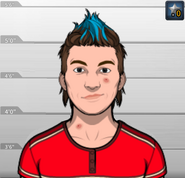 Loup, as he appeared in Evil Inside Out (Case #16 of Harwell). 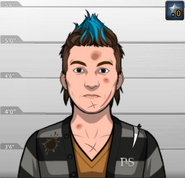 Loup, as he appeared in Blaze of Glory (Case #17 of Harwell). 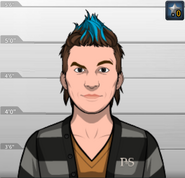 Loup, as he appeared in Their Fall's First Strike (Case #29 of Harwell).
Add a photo to this gallery

Retrieved from "https://criminal-case-official-fanfiction.fandom.com/wiki/Loup_Hunt?oldid=140036"
Community content is available under CC-BY-SA unless otherwise noted.