Lori is a 37-year-old infamous former hacker with blue eyes and long black hair. She wears a white dress with the black top part transparent along with a gray fur boa, gold eagle necklace, and pink lipstick. She sports silver moon earrings and is also seen holding a cigarette holder in her left hand. She also has a sangria stain on her dress.

In her second suspect appearance, she doesn't have a sangria stain.

In her third suspect appearance, she wears a black and blue jumpsuit.

Hang By the Eyelids 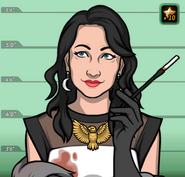 Lori, as she appeared in All Guns Blazing (Case #4 of Secrets of Yahatu). 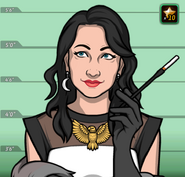 Lori, as she appeared in Hang By the Eyelids (Case #5 of Secrets of Yahatu). 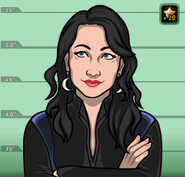 Lori, as she appeared in Hacked (Case #25 of Secrets of Yahatu).
Add a photo to this gallery
Retrieved from "https://criminal-case-official-fanfiction.fandom.com/wiki/Lori_Hanna?oldid=252089"
Community content is available under CC-BY-SA unless otherwise noted.