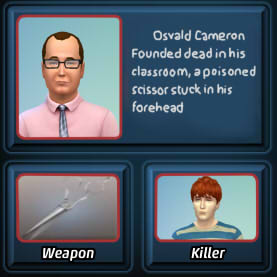 Long Weekend is the first fanmade case of Agunachopace. Is also the first case of the Nice Land district in the fictional city of Little Hollow.

The victim was a High School History Teacher named Osvald Cameron. He was found dead in his classroom with a poisoned scissor stuck in his forehead.

Malcon received information of his friend, Richard Bord, that Osvald had a relationship with his star student, Husuki Saba. Brodlay always wanted to be the boyfriend of Saba, but never had the courage to propose a relationship. And being a victim of jealousy, Malcon kill Osvald with his scissors.

Osvald could have survived if the scissor had not been poisoned. But Brodlay not poisoned his scissors; was Saba. She hated it, and wanted to denounce him for harassing her. But the School Psychologist, Brian Moses, he did not believe to Saba. Malcon behaved really well in her therapy sessions, and trust Brian won.

Retrieved from "https://criminal-case-official-fanfiction.fandom.com/wiki/Long_Weekend?oldid=58235"
Community content is available under CC-BY-SA unless otherwise noted.