Liu Chao was the killer of his ex-girlfriend, Fairview High Student, Lolita Gomes in Hook Me Up (Case #2 of Grimsdale).

Chao was first interrogated after the player and Mia found his bag in the crime scene. When told about the victim’s death, he was shocked saying she appeared in nearly every match in the wrestling ring, and he couldn’t think of anyone who would kill her.

He was later interrogated again after they found a poster where the victim kicked him in his privates. He later said that the victim was a whore, and that she did it simply because she found seeing men suffer “hot”, and whoever killed her did the right thing.

After the team collected enough evidence, the killer was revealed to be him, when asked why he killed the victim, he revealed that he killed he victim, because he and the victim had been dating behind Ayden’s back for a year, and that before the summer vacation, he and the victim blew the candles, where she dumped him, because she did not enjoy it, and when he saw Hamad’s post, he went straight to the victim to ask her if he was the baby daddy, where she confirmed that he is. Chao knew that since he impregnated the victim, he will have to pay child support, so he kept begging her to take him back, but she refused since he had- and then Vanna interrupted-, and when the victim kicked him in the privates it wasn’t out of sexual desire of seeing men in pain, it was because she was annoyed by him. Chao did not want his life ruined so he decided to kill her. Mia then informed him that the victim was not pregnant during her death, and she terminated her pregnancy, which made Chao regret his decision even more, because he didn’t have to kill the victim. Judge Powell sentenced him to 35 years in prison, not only because he killed the victim, because he was also intended to kill an unborn child. 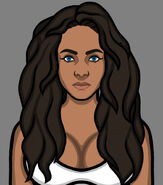 Lolita Gomes, Chao’s ex-girlfriend.
Add a photo to this gallery
Retrieved from "https://criminal-case-official-fanfiction.fandom.com/wiki/Liu_Chao?oldid=108298"
Community content is available under CC-BY-SA unless otherwise noted.