Dryad Lisa Edwards was a suspect in the murder investigation of her boyfriend, Isaac Hemsworth, in The Hanging Trees (Case #45 of Grimsdale), before being revealed as a dryad in I’m All Ears (Case #48 of Grimsdale). She then appeared as a quasi-suspect in His Last Case (Case #49 of Grimsdale), where she sacrificed her life to save Hamilton Laurent, out of regret for helping The New Olympians to capture him in order to get him killed.

Lisa became a suspect after the victim’s friend, Chad Edwards, revealed that he lived with her. Lisa was saddened upon hearing of Isaac’s death, letting Diego and Randall know she was friends with him before her brother even met him.

Lisa was spoken to again after the duo discovered that she dated the victim. Lisa revealed that she hid the relationship, as her brother would get mad at her for giving her attention to other men, where Randall advised her to not let her brother run her own life.

Mia, Hamilton and Bruno went to the homeless shelter to speak to Lisa, but didn’t find her, so they decided to speak to the building supervisor who told them that Lisa ran out of the building. The trio got worried, and Bruno suggested that they speak to Valeria, who may know where she went. The trip went to speak to Valeria, who admitted to calling Lisa after hearing of her brother’s death and that she doesn’t know where exactly she is, but she believes she must be at the amusement park as she heard sounds of a creaking sign in the background. The trio rushed there and Valeria started following them, where the four looked through the crime scene and found a golden flower. Mia, Bruno and Hamilton were now certain that Lisa’s there, but couldn’t think where could she possibly be hiding, but then Mia held the flower and her eyes suddenly turned blank white and she told her companions she could sense where Lisa is. Valeria had no idea what was going on, but when the trio started moving, she followed them all the way to a rollercoaster tunnel. There they saw Lisa, who freaked out when she saw them. The trio then heard barking outside, and when they checked it out, they caught Fabrizio holding a golden flower letting his dog sniff it to lead them to the tunnel. Mia, Bruno and Hamilton then surrounded him accusing him of working for the New Olympians, which confused Fabrizio, who told them he just wants to see his beloved again. Valeria then got out the tunnel and she managed to catch Fabrizio’s eyes, who flirted with her and asked if she’d like to join him for a romantic dinner. Valeria blushed and accepted his offer and two along Fabrizio’s dog, left the park. Mia, Bruno and Hamilton then went to speak to Lisa, who was furious at them for killing her brother and told them that she won’t let any of them touch her bush (which she was holding). The trio assured her that they don’t want immortality, but to send her to somewhere else to hide her from a cult called “The New Olympians” who are planning to hunt her and told her that her brother’s death was out of self-defense. Lisa then agreed to go with them, where Mia decided that they should speak to her father, and ask him to guard Lisa until they find a way to escort her out of Grimsdale. The trio along Lisa went to the sheriff, who was stunned upon seeing Lisa and after explaining the situation to him, Roy agreed to keep an eye at Lisa.

Diego and Hamilton searched Mia’s house where they found two things, and broken frame picture and some unclear carvings on a table. The duo deciphered the writing, which revealed a code of numbers, which they sent to Rozetta who told them that these are coordinates leading to the forest, and Lisa must have written them in order for them find her, Rozetta then uploaded the coordinates to a GPS and gave it to Hamilton, and told him that he should follow the instructions on it to find Lisa, after he’s done with everything.

After dealing with everything, Hamilton was waiting for Diego, when suddenly he arrived along Bruno and Randall who he told to come with them to guard them in case they encounter the New Olympians. The quad followed the GPS instructions, where they were led to Lisa. Hamilton helped Lisa up, when suddenly he got a phonecall, which he answered and it turned out to be Diego asking where he is and that he’s ready to go. Hamilton swallowed his throat and turned around, where instead of seeing his friends, he saw Marisol along Skye and Clay. Marisol smirked and revealed that this whole thing was a setup in order to capture them. Hamilton then looked at Lisa, who admitted to working with them as she wanted the team to pay for what they done to her brother. Hamilton then pulled Lisa behind him, telling the New Olympians that he won’t let them hurt her, and told her to run away while he risks his life fighting with them. Marisol laughed, and pulled out a jar with a golden rose in it, and told him that they won’t hurt Lisa, as they only need a single flower to make a potion for many, she then told Clay to create a fireball using his powers, to burn Hamilton to death. Lisa was shocked to see that Hamilton was willing to sacrifice his life despite her conspiring to kill him, and felt ashamed for it, so ashamed that when Clay shot a fireball at Hamilton, she came at front of him, and let the fireball touched her bush instead. Once the bush died, Lisa started to wither, and then Marisol realized that the flower Lisa gave them was starting to wither as well and started yelling. Hamilton held Lisa, where she apologized for what she did before turning to ashes. Although they lost their root to immortality, Marisol, Clay and Skye still insisted on killing Hamilton, and considering they were 3v1 he stood no chance. But suddenly, the earth started shaking and the 4 at the forest heard a loud scream. The New Olympians realized by getting the dryad killed, they angered both the gods Pan and Demeter, and so Marisol and Clay held Skye’s hands, and she transformed them into birds, as well as herself, where they flew away from the forest. Realizing he is in danger too, Hamilton started running as fast he can away from the forest. 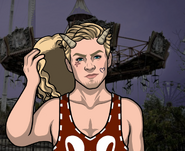 Isaac Hemsworth, Lisa’s late boyfriend
Add a photo to this gallery
Retrieved from "https://criminal-case-official-fanfiction.fandom.com/wiki/Lisa_Edwards?oldid=206028"
Community content is available under CC-BY-SA unless otherwise noted.