Linda Potters is a main character featured in Season 1 of Criminal Case, where she serves as the Starlight Shores Police Department's Junior Officer until her promotion to Chief of Police in Accident and Emergency (Case #47 of Starlight Shores).

In the AI, Alice decided to do some research into Linda's past with Theo. After looking up records she discovered that Linda and Theo were high school sweethearts who often got into trouble for leaving school with each other. When confronted about this Linda was very sheepish and embarrassed.

The Festival of Fear

When Linda discovered Theo's body at the festival she burst into tears before becoming angry at his killer and wanted to catch them. During the investigation, Linda is pulled from the investigation and the player's partner for the rest of the case is Malcolm.

A Walk in the Park

The City of Demons 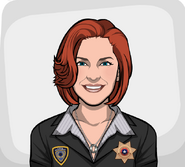 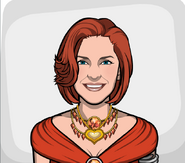 Linda, as she appeared in Breaking the Ice (Case #9 of Starlight Shores)
Add a photo to this gallery
Retrieved from "https://criminal-case-official-fanfiction.fandom.com/wiki/Linda_Potters?oldid=145586"
Community content is available under CC-BY-SA unless otherwise noted.