Let The Battle Begin is a case featured in Criminal Case. It takes place in the Saint Teufel district of Grimsdale.

A month after last case, Galinda and Marisol are seen on a stand above their charm-spoken troops, with the Saint Teufel army with their Xerdan allies at front of them, waiting for battle. Marisol then stepped in, holding a microphone singing a song with a mesmerizing voice, hoping to brainwash the Saint Teufel army to join their side. Unfortunately for her, the army were warned about her sorcery, and they all have worn specializes ear plugs, where the only things they could hear were orders from Johanna. Galinda grew impatient and so she called for Norman to step in the stand, to start the fight, but received no replies for him. Suddenly an Iris message was sent to her from Clay, who told her that the prisoners they had, have escaped.

Meanwhile at the dome, Kelemen and Fayzah managed to evacuate all the prisoners the New Olympians have been capturing. After watching the prisoners get out. Hamilton, Vicky, Rozetta and Mia (who was still depressed over Diego’s death), touches four guards whom they knocked out and started chanting greek words where they transformed into the guards and they decided to go search the dome for the mirror they were looking for. Rozetta was paired up with Mia, while Hamilton was with Vicky. While searching the dome, Hamilton and Vicky came across the sword-making room, which they entered and saw General Norman Min, dead, with molten copper being spilled on him.

Hamilton and Vicky were shocked at the sight, but decided to ignore it anyway as there is no good investigating Norman’s death other than wasting their time. That was until Clay Banger entered the room and was shocked at seeing Norman’s body, where the duo had to pretend they were guards and were ordered to search the dome for any intruders. The duo started to investigate the murder where they added Clay Banger to the suspect list as well as now-released prisoner and husband of Cynthia Leroux, Louis Leroux and Fayzah Jawab, who for some reason was still sneaking around the dome. While the duo were recapping the case, Marisol barged into them and started yelling at them.

Marisol have heard of her favorite boyfriend’s death and was not happy about it, the disguised Vicky then assured her that their getting on the case, where Marisol told them they have until the end of the day to bring the killer to her, or else she will permanently charm-speak them like she did to the soldiers. Vicky and Hamilton then added Marisol to the suspect list and then continued the investigation where they found reasons to suspect Kelemen Hart. Additionally, they found out that Fayzah had stolen Norman’s dagger while helping release the prisoners and that Norman pulled out Louis’ two front teeth, as he grew jealous when Marisol pointed out how good they looked. Vicky and Hamilton were then distracted when they heard noises coming from the background.

Vicky and Hamilton went to check out what’s the deal and were displeased when they saw Asbjorne playing with two rings which looked a lot like the ones Rozetta and Mia were wearing, and were even more pissed when they saw Katherine tying up the two girls. The duo quickly then returned to the investigation, where they learned that Norman eventually saw Kelemen at the dome and that Norman have given Marisol an ultimatum to either dump Asbjorne and Clay or he dumps her, which they decided to speak to both Marisol and Clay about. The duo then found enough evidence to arrest Clay Banger for the crime.

Vicky and Hamilton went to confront Clay, who tried to deny the murder, but eventually snapped saying that he did it to help the resistance. The duo were shocked at what they heard, that they took off their rings and revealed themselves. Clay revealed to the duo that he joined the New Olympiams for obvious reasons: greed and power, but after year and year, he regretted his decision, because not only have he got himself in evil schemes, but the only reason people worshipped him was either because they were brainwashed or because he feared him, and he didn’t want either of that. He even went further to saying that it wasn’t until a month ago have he realized that the New Olympians were no friends of his, but simply using him as a pullet and that the only true friends he had were Julian, Ramona and the people of the GDPD, who are either dead or loathe him for the terrible things he’s done. After revealing all that, Clay then pulled a gun and reached it to his head, and before Vicky and Hamilton could stop him, he pulled the trigger.

After Clay’s suicide, Vicky and Hamilton went back to their disguises and decided they should search the sword-making room, in case Clay left any clues on where the magic mirror could be. Suddenly, a demanding Asbjorne approached them and ordered them to speak with him.

Nervously, Vicky and Hamilton came to Asbjorne, who told them before his death, Norman have devised a plan to attack the Saint Teufel army, which he memorized. Unfortunately, none of the other New Olympians knew of the plan and so Galinda needs to see it by herself to use it during the battle. Vicky and Hamilton didn’t like the idea of helping the New Olympians, but not wanting to expose their identity to Asbjorne, they decided they should search the prisoners’ room where Norman spend most of his time at, to find a sketch of the New Olympians’ plan. The duo found the plan in pieces, and after fixing it, it suddenly occurred to Vicky that they could miss with the sketch to reduce the chances of Galinda’s troops to win the battle. After “upgrading” the plan, Vicky and Hamilton went to Asbjorne and gave it to him.

Vicky and Hamilton went to search the sword-making room for clues of the magic mirror’s whereabouts, where they came across Clay’s tablet. After unlocking the tablet, Hamilton let Vicky search through its files, where she managed to find the room where the mirror was hidden...

YOU ARE NOT HAMILTON.

After sabotaging the New Olympian’s military plan and discovering the magic mirror’s whereabouts, Vicky and Hamilton entered a room, where Hamilton saw a mirror identical to the one he remembered seeing at Old Valley’s graveyard. Suddenly, Hamilton received an Iris message from a semi-nude Kelemen Hart.

Hamilton was confused on why Kelemen had messaged him and why was he practically naked, where Kelemen told him that whatever mirror they found in the dome weren’t the one they were looking for and that they were being tricked, and that he knows where the actual mirror is. Before Kelemen could say anything about it, a cheerful Marisol came to him asking him what he was doing, and once she saw that he was Iris messaging Hamilton, her smile went away as she realized that she had been tricked and out-seduced. Angry, Mari summoned a dove who gave her a dagger, and threatened to kill Kelemen, who had no choice but to end his message with Hamilton. Hamilton was shocked about what he saw, when suddenly he heard glass shatter. He turned his head and saw that Vicky had broken the mirror, where he reacted quickly and jumped at her, and the two ended up being trapped by a net. Katherine then entered the room.

Katherine approached the two guards trapped in the net, where she removed their rings, exposing them as Hamilton and Vicky. She then smirked and called the two lovebirds fools for thinking that Galinda would have kept the mirror in the dome, knowing that there is a mole who might expose its whereabouts. Galinda then entered the room and was glad to see that Hamilton have been caught, and gave him the choice of either joining them or be sent to a cell for execution, where he replied with a spit. Galinda expected that type of reaction, but obviously wasn’t satisfied with it, and so she told Katherine to send Hamilton and Vicky to a cell with Mia and Rozetta.

Katherine led Hamilton and Vicky to the dome’s dungeon, where they saw Asbjorne waiting next to a cell which he opened and pushed Vicky and Hamilton into it, where they reunited with Rozetta and Mia. After closing the cell, a holographic screen, at the shape of an Iris message, appeared at front of the prisoners, where they saw themselves. Asbjorne smirked and told the prisoners that whatever he’s seeing is what they see in the screen, and that he wanted to make sure they get to see their army falling down, right in front of their eyes.

An hour later, Rozetta, Mia, Vicky and Hamilton are seen in their cell watching the screen. The armies are both in their positions, ready to fight, a signal was then sent to start the battle. But something went wrong, instead of obeying Galinda’s commands, her troops stared at the battlefield, confused, not knowing what to do. Galinda was equally confused by that sight, and then realized that somehow Marisol’s spell was broken. Rozetta, Mia, Vicky and Hamilton were both shocked and relieved when they saw that on the screen.

Kelemen Hart
Add a photo to this gallery

Mia & Rozetta
Add a photo to this gallery 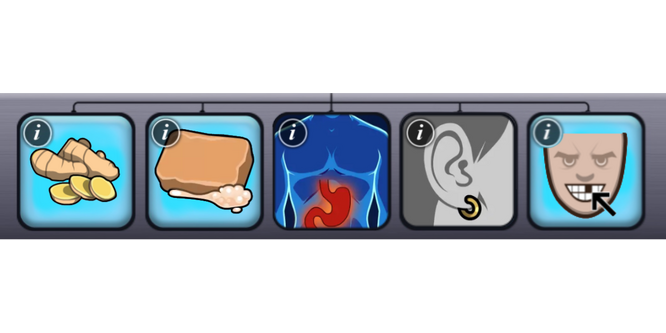 Retrieved from "https://criminal-case-official-fanfiction.fandom.com/wiki/Let_The_Battle_Begin?oldid=211398"
Community content is available under CC-BY-SA unless otherwise noted.