Leonidas Lupo is a main character in Season 3 of Criminal Case where he serves as a junior detective of the Fario Police Department after previously serving as the player's temporary partner in Tear of Sadness (Case #60 of Secrets from Beginnings) where he also made a quasi-suspect appearance.

Prior to his promotion, he appeared as a suspect in a murder investigations of eight different people and quasi-suspect in six other cases, as well as a minor appearance during A Death in Disguise (Case #27 of Secrets from Beginnings).

Leonidas is a 20 years old student at Fario University and Fario Police Academy as well as the main voice actor of Felix the Cub. As of Tear of Sadness, he is a junior detective of the Fario Police Department. He has brown eyes and short brown hair. He can be seen wearing a red and white shirt with big black linings on it and the words «GRIM BADGERS» on it and their logo on the top right. Furthermore, he can be seen wearing a gold chain with an amulet on it. He is also seen with his pet wolf Max who has brown and light brown fur and a golden laurel wreath and a red and gold Roman outfit.

Per his first suspect appearance, it is known that he plays the lottery and golf.

In his second quasi appearance, Max isn't present as Leonidas is seen wearing a golden dragonfly brooch on the left side of his shirt.

In his second suspect suspect appearance, he can be seen holding a golden Wolf Castle mask. It is known that he watches Felix the Cub, eats dog biscuits and uses heat cream.

In his third suspect appearance, he ditched the mask. It is known that he eats sushi and knows Morse code.

In his fourth suspect appearance, Max is back with him. It is learned that he sings, uses lip balm and that he smoked one cigarette before escaping from the location where he was able to witness the experimentations.

In his fifth suspect appearance, it is noted that he eats hot dogs and knows Fario's constitution.

In his sixth suspect appearance, he has a blue stain on his shirt. It is known that he watches Ice P Show, uses gun polisher and quotes Leonardo da Vinci.

In his seventh suspect appearance, the stain is gone. It is learned that he uses a spirit board, eats candy waffles and is superstitious.

In his eight suspect appearance, it is dicovered that he plays Weirder Stuff, drinks wine and is into secret societies.

Leonidas came to the station during the AI, reporting a murder at the luxury mansion! When asked about it, he explained that while he was walking with his pet wolf Max, he hard loud screams coming from the mansion, followed by a blood spread. Terrified, he immediately went to inform them and, due to the potential risk of the killer having seen him, Barb told him to stay at the station to keep him safe.

Leonidas came in suspicion after the team found bloody paw prints matching Max at the crime scene of kidnapping victim Dionisio's murder. When asked what his wolf was doing there, the student explained that it was meat and that sometimes, a second can lead somewhere bad. He explained Max had wandered off when he wasn't looking and that when he saw him getting out of the warehouse with bloody paws, he thought it was just because there was blood on the floor from an animal, not from a dead body. When asked about the victim, he unfortunately couldn't tell them anything as he never met him prior.

The university student was interrogated again after a video of him and Dionisio arguing a few days prior to his kidnapping was found. Leonidas explained that he had caught him doing something to street dogs and that he thought that the victim was hurting them, but later discovered that the young boy was only helping them. He told them he had apologized to Dionisio and that everything had been cleaned up between them. When asked if he could have done something to him even if everything was fine, the student told them that he would never hurt children, even less kill them and that he wanted to find the killer as much as them, going as far as to tell them that if they don't find it, he will by himself.

Leonidas was found innocent after the team arrested lawyer Ben Davenport for the kidnapping and murder. Later, due to the team knowing that another analyze to find Milton M. Milton would take too much time, they asked Leonidas and Max to help them. With their help (Mostly Max sniffing Milton's shirt), the team was able to find the young boy alive and get him to the hospital. Happy to have help, Leonidas told them that he wished them good luck in finding everything they need before going away.

An Explosion of the Heart

Leonidas came to the station asking for help. He explained that on his way to Fario University campus through the district, he saw a strange man taking cages out of a van near that secret temple's entrance with blood on his hands. Mia and the player reassured that they would investigate the matter.

Demon in the Shadow

Leonidas came back into suspicions when the team found a picture of him and the victim, photographer Rock Silver. Surprised to see the team at the Wolf Castle, the student explained that he met the victim when he came here one time and they talked for a while. Upon being told of the murder, Leonidas was horrified to learn that something like this could have happened and, when asked if he knew if the victim could have any enemies, he explained that he didn't know him a lot but that he never seemed like a bad man.

He was interrogated again when the team discovered that the victim had putted rat poison in Max's bowl. When asked about it, Leonidas angrily told them that he had caught Rock putting poison in his pet's bowl after it sniffed around the room for some dog food. When asked if he would murder someone for it, he answered that he couldn't cross the limit and murder the photographer for it, but that he didn't know what would have happened if Max had died because of Rock as Max was one of his closest friend. The student then started tearing up as he petted his wolf.

He was found innocent once more when the team arrested Wolf Castle monk Gustavo Ferberg for the murder. Later, he came to the station with a torn papyrus. He explained that while passing through the railroad, Max had discovered that piece of papyrus with strange marks on it and he had decided to give it to them in case of it being important.

In The Next Life

Let Me Love You

It's All Egyptian to Me

The Darkness of the Night

To the End of News 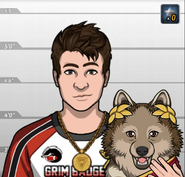 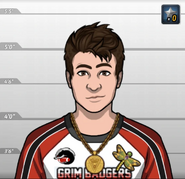 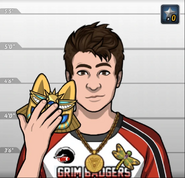 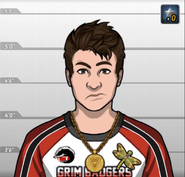 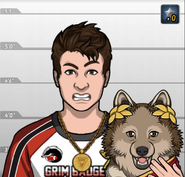 Leonidas, as he appeared in Learn by Heart (Case #30 of Secrets from Beginnings) 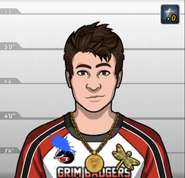 Loenidas, as he appeared in The Darkness of the Night (Case #45 of Secrets from Beginnings)
Add a photo to this gallery
Retrieved from "https://criminal-case-official-fanfiction.fandom.com/wiki/Leonidas_Lupo?oldid=219083"
Community content is available under CC-BY-SA unless otherwise noted.