Leigh Tempest is a main character featured in Season 1 and Season 3 of Criminal Case, where she serves as the Flaming Eagle Police Department's Chief of Police after having served as the Senior Detective in the first season.

She then became a suspect in the murder investigations of gang leader Joseph September in Like Fighting Snakes (Case #33 of Rosenoque) and FEPD Chief of Police Thomas Ernest in The Thorn Amongst the Roses (Case #54 of Rosenoque). She later became a suspect in the murder investigation of Mayor Leonard Oakley in Pawsitive in the Bad Times (Case #58 of The Mystery).

Hailing from Karachi, Pakistan, Leigh is 39 years old and worked as a rookie cop prior to her tenure as a senior detective. Leigh has long black hair styled in a braid and green eyes. She is also adorned with large gold earrings, a silver nose ring, a tilaka mark, and a gold jhoomer with rubies and pearls on her forehead and braid, and a layer of thick red lipstick. Leigh normally sports a tangerine blouse underneath a dark blue jacket with the badge of the Flaming Eagle Police Department sewn on the left side. Other than that, she wears a golden pendant in the shape of a heart.

Now 42 years old and the Chief of the FEPD, she is seen wearing the typical Chief uniform consisting of a black suit with badge aplenty, five stars on the shoulders, two pockets at the front, and a few medals on the left as well a white shirt and black tie, and has two golden pins on both sides of the suit's collar. Other than that, Leigh has a black badge of the Flaming Eagle PD pinned to her left and a golden necklace with charms of a tree, an elephant and the word "OM" in Hindu.

Leigh is known to be a serious person in her field as a police officer who still enjoys going out with her friends. She is also known to be a open-minded autodidact. She enjoys reading and learning new things, although she does have a weakness for mathematics. Her favourite food is known to be halwa puri and her favourite animal is an elephant.

Per her first suspect appearance, she has an oil stain on her clothing. She is known to handle snakes and eat sunflower seeds.

Per her second suspect appearance, she is noted to know mechanics, take painkillers and suffer from insomnia. 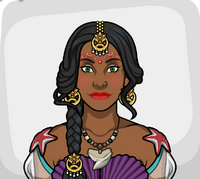 Leigh, as she appeared in Threat from the Past (Case #45 of Rosenoque)
Add a photo to this gallery

Retrieved from "https://criminal-case-official-fanfiction.fandom.com/wiki/Leigh_Tempest?oldid=212687"
Community content is available under CC-BY-SA unless otherwise noted.