Larry Xoilin is a 26-year-old male. He is seen having brown eyes and curly brown hair. He also wears glasses and has a gold locket round his neck. He wears a purple jacket with lots of chains holding it together.

The Boat of Blood

Larry become a quasi-suspect after the team analysed a case file. They went to talk to him about why Edward ran away, he replied that he ran away because the lights and music had an error and that it got too loud for Edward. Kia then took Larry to unit with Edward. It was later revealed by Kia that Larry was planning a fundraiser for "Help Autism UK". 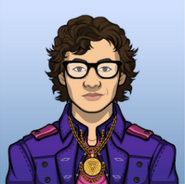 Larry, as he appeared as a quasi-suspect in The Boat of Blood 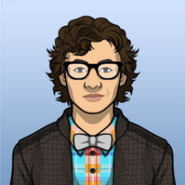 Larry, as he appeared in Party Pooper 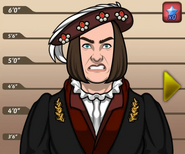 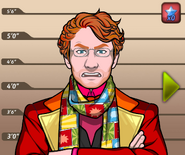 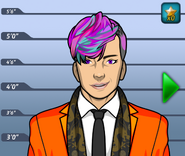 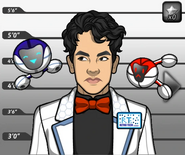 Martyn Xoilin, Larry's cousin
Add a photo to this gallery
Retrieved from "https://criminal-case-official-fanfiction.fandom.com/wiki/Larry_Xoilin?oldid=181418"
Community content is available under CC-BY-SA unless otherwise noted.