Kimberly Diart was a Spanish woman who was travelling to the city of Parinaita. She is seen with long black hair with green eyes. She is also seen sporting a red dress with multicoloured buttons.

Kimberly was found in one of the funnels of the Parinaita ship, with some of her pearls from her dress on the floor, she was seen with a huge cut to the top of her head and in the brain and there was blood all over her face. Even if the Coroner thought the murder weapon was a knife, it was later confirmed to be a fire axe.

The killer turned out to be the ship's waitress, Amy Wells

Although she didn't admit to murdering Kimberly at first, she then opened up and revealed that she was destroying the ship because she wanted to die from her depression however Kimberly saw and Amy knew that Kimberly would try to tell someone so she killed her so she could keep her death a secret and she revealed that she couldn't cope with the time of year because of her mother dying on one of the very same ships. She was send to a medical hospital, so the doctors could help her with her depression. 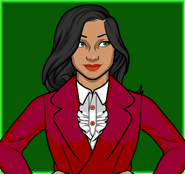 Kimberly, as she appeared in The Boat of Blood. 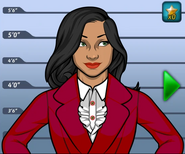 Kimbery, as she appeared in Out of Time!
Community content is available under CC-BY-SA unless otherwise noted.