Kia Longfoot  is a main character featured in Season 2 of Criminal Case. Appearing as the Detective of the Parinaita police, she serves as a partner to the player throughout the season.

Kia Longfoot is a 21-year-old Canadian woman. She is seen with long brown hair with some of it beaded, she also has blue eyes and wears glasses. She is seen wearing a blue jacket with a pink and purple arrow shirt. She is also very friendly and has a great understanding for people who are having problems.

The player arrives in Parinaita, only to be greeted by Kia and Henry Jolipop, the other partner for the series, she seemed happy that the player got to Parinaita safely and after the player gave their papers to Henry, she wanted to see the player's skills and so gave them a list of things to find

The player may choose Kia to join the investigation of each crime scene (in any The Secrets of Parinaita case she teams up with the player) and provide hint bonuses. She is available as a 1-hint partner. 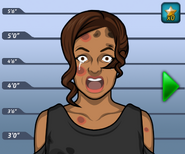 Kia, as she appeared in Igni 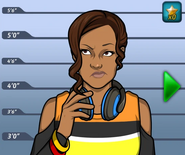 Kia, as she appeared in Parinaita’s Only Heroes... Broken! and Out of Time! 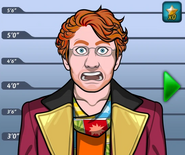 Expaei Ties, Kia's killer
Add a photo to this gallery
Retrieved from "https://criminal-case-official-fanfiction.fandom.com/wiki/Kia_Longfoot?oldid=197096"
Community content is available under CC-BY-SA unless otherwise noted.