Keyon Imamu is a main character appearing in Season 1 of Criminal Case, where he serves as the Nyctochral Police Department's Chief of Police.

Hailing from Cape Town, South Africa, Keyon is the 45-year-old chief of the Nyctochral Police Department who worked as a criminal lawyer prior to his tenure in the department. He is a tall brown-haired and brown-eyed man of medium size with facial hair and a small beauty mark under his left eye. He sports a typical Chief of Police uniform which consists of a black suit with badge aplenty, five stars on the shoulders, two pockets at the front, and a few medals on the left as well as a black hat that has a golden lining, two golden eagle emblems and a golden badge in the middle. Underneath the suit, Keyon wears a white shirt and black tie, and has two golden pins on both sides of the suit's collar.

It is known that Keyon's favorite animal is a zebra and his favorite food is chakalaka. He is also known to be a strong leader who is overprotective of his team and very serious at all times.

As the Chief of the Nyctochral Police Force, Keyon requires reports from three different "teammates" (friends who play Criminal Case and are recruited to the player's team) before he can let the player advance to the next case of Nyctochral. Besides that, he notifies the player each time they level up in Nyctochral.

Also, as of the release of Nyctochral, the player may choose Keyon to join the investigation of each crime scene (in any Nyctochral case) and provide hint bonuses. He is available as a 2-hint partner. (Note that this feature is only available on the mobile version of the game.) 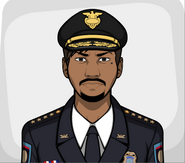 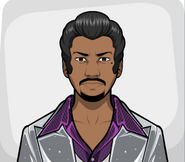 Keyon's Halloween costume in All Nightmare Long (Case #1).
Add a photo to this gallery

Retrieved from "https://criminal-case-official-fanfiction.fandom.com/wiki/Keyon_Imamu?oldid=43866"
Community content is available under CC-BY-SA unless otherwise noted.