Criminal Case Official Fan-Fiction Wiki
Register
Don't have an account?
Sign In
in: Characters of Pinefield, Suspects of Pinefield

Katherine "Katie" Isabelle Current was a suspect in three murder investigations in Daytide Coast and one in Floral Fields as well as being a quasi-suspect in one case.

Katie is a 39-year-old journalist and CCN reporter with dark brown hair and blue eyes. She dons a beige raincoat and a beige turtleneck underneath it. She also dons a beige hat with a blue rim. Additionally, she has a camera around her neck, a lapel pin of the Pinefield Herald pinned to her left and wears pink lipstick. It is known that Katie is right-handed and uses sunscreen.

In her second appearance, she dons a pink bikini with a matching flower pinned to her right. She also wears a white captain's hat which shows her new hairstyle. In addition, she wears a blue and pink necklace with golden seashell designs on it. It was discovered that Katie eats oysters, goes fishing and scuba dives.

In her third appearance, she wears her standard raincoat, turtleneck and hat but lacks her camera and lapel pin, along with her hair going back to the way it previously was. It was discovered that she is a trained fighter, takes sleeping pills and knows astronomy.

In her fourth appearance, she has her camera back. It was discovered that she is knowledgeable about plants, smokes weed and eats cactus.

Katie is accompanied by her cameraman in almost all of her appearances.

Aim of the Game

Fresh off the Boat 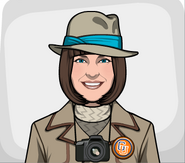 Katie, as she appeared in Aim of the Game (Case #3 of Pinefield). 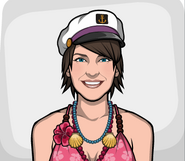 Katie, as she appeared in Fresh off the Boat (Case #4 of Pinefield). 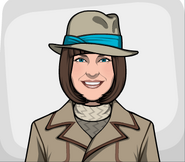 Katie, as she appeared in Tooth and Nail (Case #6 of Pinefield).