Cut me off your Life

After arresting Clive, and helping Vicky, a beautiful Slovak girl, Katherine Votjka, came to the station. The team spoke to the girl, who told them that Joe Warren have decided to invite them into attended the election party, which will happen after 5 months, as special guests, where they’d sit in the front row.

While Diego and Hamilton were observing the dead body they found, Katherine who was walking past them, decided to see what they were staring at, where she recognized the dead man, and identified him as Anton. The duo decided to talk to her, to know her relationship with the victim, where she started crying and revealed that he was, her brother. She then led the team to his apartment, so they’d investigate it.

The duo spoke to her again, after learning that she and the victim despised each other, and that he is trying to get along with her. Katherine revealed that her brother have tormented her, ever since she was a baby, and that after her parents died, they went to live with their uncle, who went in any business trips, and instead of taking care of her, Anton would go out with his friends. She was grateful when he turned 21 and decided to leave the house, and that once uncle died she had to live with Anton, would although appeared much kinder, she still couldn’t forgive him, for being an asshole to her in the past, and when she had the chance to she moved out. She them revealed that today he tried to get along with her, but she pushed him back, but now after her death, she regrets the fact she never forgave him.

Katherine was spoken to about the murder, after the duo found her planner in the election podium. She informed the team she heard about the murder, from witnesses, and felt pity for the victim’s death. Hyrum later on, came up to Hamilton and Hamida, telling them that Katherine’s been shot at the blue party offices.

The duo took her to the hospital, and asked her if she saw the person who shot her, where she claimed she didn’t see who shot her.

Katherine was revealed to be guilty at the climax of the investigation, When the duo came to arrest her, she didn’t deny it, and just pointed out how she underestimated them. Hamida asked her whether she did it for the Anoterous, where Katherine laughed, and claimed how she and her friends are way stronger than the Anoterous, and that they told her to kill Charles, in order to humiliate The Anoterous, and show them that they are a bigger threat, than they once thought. She further explained, that it was one of her friends who shot her, on her arm, in order to make her seem less suspicious to the police. The duo asked Katherine, who are these friends of hers, where she told them the time of questioning is over. Judge Powell sentenced her to life in prison, with no parole.

Diego and Hamilton went to talk to Rozetta, where she told them, that she figured out what Charles’ secret is. She then explained, that during a meeting about whether they should trust Mia and Hamilton to investigate about The Anoterous, Charles warned them, that his spies suspect that there is a greater threat than an Anoterous. Charles didn’t have proof of it, so he didn’t explain things further, but Rozetta suspects the greater threat he was talking about, are Katherine’s friends. The duo then recalled that Charles asked Penelope to spy on Polly, and that when Hamilton and Mia asked Polly about the Anoterous, she said that she left the Anoterous for the “winning side”, which isn’t the police. After hearing this, Rozetta believed what she though, even more, and asked the duo to investigate the Election podium, for something belonging to Charles. After finding a notebook, they sent it to Yoyo, who said that Charles was suspecting about the existence of group of 15-25 year old Ex-Anoterous members, that are labelled as sworn enemies to the Anoterous. The duo then decided to speak to Katherine, to know the actual reason behind killing Charles, where she told them that she didn’t lie about her motive, she just left out some parts of it. The duo then spoke to Rozetta to tell her about the results.

After Dora and Princess got trapped by the net, Katherine approached the two guards trapped in the net, where she removed their rings, exposing them as Hamilton and Vicky. She then smirked and called the two lovebirds fools for thinking that Galinda would have kept the mirror in the dome, knowing that there is a mole who might expose its whereabouts. Galinda then entered the room and was glad to see that Hamilton have been caught, and gave him the choice of either joining them or be sent to a cell for execution, where he replied with a spit. Galinda expected that type of reaction, but obviously wasn’t satisfied with it, and so she told Katherine to send Hamilton and Vicky to a cell with Mia and Rozetta.

Katherine led Hamilton and Vicky to the dome’s dungeon, where they saw Asbjorne waiting next to a cell which he opened and pushed Vicky and Hamilton into it, where they reunited with Rozetta and Mia. After closing the cell, a holographic screen, at the shape of an Iris message, appeared at front of the prisoners, where they saw themselves. Asbjorne smirked and told the prisoners that whatever he’s seeing is what they see in the screen, and that he wanted to make sure they get to see their army falling down, right in front of their eyes.

Hamilton and Vicky then started recapping the case, where Cynthia Leroux approached them and told them that Katherine Votjka have came to surrender.When Vicky and Hamilton came to approach Katherine, she broke down in tears claiming that she can’t handle being involved in the New Olympian’s evil schemes any longer. The duo were disbelieved, and asked her if she can tell them the magic mirror’s updated location, where Katherine revealed the only people who knew of it were Galinda and Marisol as they mistrusted everyone due to the mole situation. However, Katherine revealed that before the battle, Marisol told her that she received a letter asking her to come to the camp in the Xerdan forest, which Katherine suspects was from Kelemen to deceive her. It was later discovered that Katherine had a crush on Norman and that she convinced him to send the ultimatum he sent to Marisol.

Rozetta and Hamilton went to speak with Elvira, to see what information she has to share. Elvira told the two that she heard that the team were planning to break the mirror the New Olympians have used during their immortality ritual. She then warned them, by saying that if they broke the mirror, whoever used its magic will be wiped from existance. Rozetta and Hamilton were horrified when they heard this, since, despite all the things Skye and Katherine did, neither deserved to meet this fate and so they decided to go and warn them. Before Hamilton left the amusement park, Elvira grabbed his hand and told him that he should watch his back, as she can sense something horrible would happen to him today. Rozetta and Hamilton went to speak to Katherine and Skye, explaining them the situation, where Skye told the duo that Galinda hid magical amulets somewhere in the emergency stairway at the dome, which she told the New Olympians they’ll have to wear in order to drain their powers and protect themselves, in case someone managed to find out where the mirror is being kept at. The duo investigated the emergency room, where they found a locked briefcase, which they unlocked and found 12 necklaces. Realizing two of the necklaces looked a little different than the others, Rozetta decided they should give the necklaces to Elvira for analysis, who told them that most of the amulets they showed were decoys, and only two of them were magical which is all what they needed to protect Katherine and Skye. Rozetta and Hamilton gave the necklaces to the girls, where Skye transformed back to her human form. 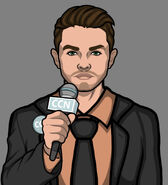 Anton Votjka, Katherine’s late brother
Add a photo to this gallery
Retrieved from "https://criminal-case-official-fanfiction.fandom.com/wiki/Katherine_Votjka?oldid=213203"
Community content is available under CC-BY-SA unless otherwise noted.