Justin was spoken to about defaced poster of him on the crime scene with George's signature.He said that George hated him after Justin arrested him for snooping at Justice Corps headquarters.When team asked him about fire at the bank,he denied accussations and claimed that someone from Irish Gang set it on fire.

Justin was interrogated again after team found picture of George and Justin's fiancee Abigail with ''YOU KILLED HER'' written on it.He said that George accidently killed his fiancee years ago and was set free after his father took the blame the murder and served a prison sentence.Justin tried to prove this,but court didn't believed him.

After arresting the killer,Erica was interrogated again for some details about the kidnapper.She said that she only knew that he was a man and he mentioned something about the bank before knocking Erica unconsious.Team investigated the train once again and found Justice Corps badge in there.When they showed this to Erica,she said that the kidnapper also threw that near Madam Xiang to frame Justin. Team spoke to Justin and said sorry for accussing him so early without solid evidence.Justin accepted their apology and told them that they won't rest until this kidnapper is caught.

Justin became a suspect after team found out that he and Georgia were friends.He said that they knew each other for long time,but they lost contact after she became a thief.

Justin was spoken to again about a fight between him and Aila Shropshire.He said that Aila was a crazy woman like Georgia.When team asked him why he thinks that Georgia is crazy,he said that she has been stealing from him ever since.

Later,Justin Lawson came to station and said that his officers found out something important.Whoever stole the money from a bank used it to buy corn from local farm.They bought corn from Irish farmer Colum O'Callaghan.Team went to interrogate Colum about this and to figure out why did someone needs corn so bad and who is behind all these crimes...

Justin became a suspect after team found out that he placed Aila under arrest for attacking him earlier.He said that she was not acting properly and that she can't attack Justice Corps member like that.

Justin was spoken to again after team found Aila's picture and blow darts on it with his signature on it.He said that she was an impossible client and that she was reporting everything non-stop,from loud neighbours to annoying cats.After Lawson refused to help her,she threatened that she will talk bad about him infront of her high class friends. 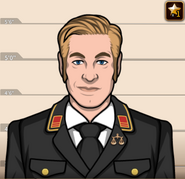 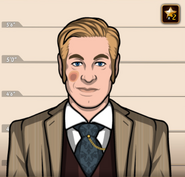 Justin, as he appeared in You Steal,I Kill (Case #4 of Back to Past). 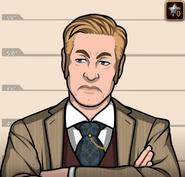 Justin, as he appeared in Like a Thief in the Night (Case #6 of Back to Past).
Add a photo to this gallery
Retrieved from "https://criminal-case-official-fanfiction.fandom.com/wiki/Justin_Lawson_(BTP)?oldid=110900"
Community content is available under CC-BY-SA unless otherwise noted.