Josip Filipovich (1994-2019) was the suspect in the murder investigation of vampire Callum Edwards in Through My Vampire Heart (Case #24 of Laroy Bay) and the killer of movie director Paula McGee in The Forest Game (Case #40 of Laroy Bay). He then appeared as a quasi-suspect in A Ball of Fire (Case #31 of Venusville) and Act of Disloyalty (Case #35 of Venusville) before getting murdered in The Bird Box (Case #36 of Venusville).

Josip was a 25-year-old now former senior student with green eyes and wavy black hair. He wore a white collared shirt with a black tie under a black suit.

In his second appearence, he changed his black tie with blue one.

In his third appearence, he wore a orange prison jumpsuit.

In his fourth appearence, he was seen wearing his black suit with black tie again.

Through My Vampire Heart

Josip was interrogated after team found out that he,his brother Bruno Filipovich. and Callum were friends.Since Bruno is not in the town,team interrogated him.He said that they helped Callum a lot after town feared him because he was a vampire.

Josip was interrogated again after team found his credit card in Adrienna's hideout.He said that he wanted to find her hideout and report it to police,but when he found it,he dropped his credit card there.

Josip became a suspect after team found his phone on crime scene with his selfie on crime scene.He said that he is Paula McGee's assistant and that he is always there.When team told him that she has been murdered,he was shocked to hear that.

Josip was spoken to after team found his DNA on speargun used to spear Paula in chest.He said that speargun was always used in The Forest Game movie and it was important for shooting some scenes.

Later on,shockingly,team arrested him for a murder.Josip tried to lie,but he confessed.He said that it was her or him and he had to kill her.Team asked him why and he showed them threats that were sent to him from unknown person.That person told him that he has one week to eliminate Paula or he and his family are going to die.Josip panicked and didn't told anybody about that.So when he got on movie set,he speared Paula in chest and staged murder as an accident.Judge Eva Rose sentenced him to 8 years in prison with chance for parole in 4 years.

A Ball of Fire 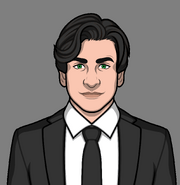 Josip, as he appeared in Through My Vampire Heart (Case #24 of Laroy Bay). 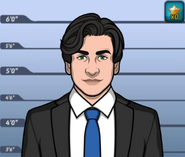 Josip, as he appeared in The Forest Game (Case #40 of Laroy Bay). 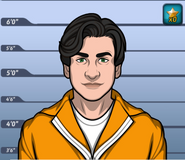 Josip, as he appeared in A Ball of Fire (Case #31 of Venusville). 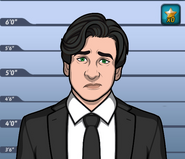 Josip, as he appeared in Act of Disloyalty (Case #35 of Venusville).
Add a photo to this gallery
Retrieved from "https://criminal-case-official-fanfiction.fandom.com/wiki/Josip_Filipovich?oldid=172046"
Community content is available under CC-BY-SA unless otherwise noted.