Joshua Blade is the Laboratory Assistant of the Flaming Eagle Police Department in the third season of Criminal Case.

In the first season, he appeared as a suspect in the murder investigations of four people. He also made two minor appearances and a quasi-suspect appearance before he took on a central role in The Thorn Amongst the Roses (Case #54 of Rosenoque). He later became a suspect in the murder investigation of his adoptive uncle, DJ Abdul Carla in The Legends of Reality (Case #26 of The Mystery)

16 years old, Joshua is a young medical student who works to take care of his younger brother, Zach Blade. He has brown hair with dyed blue tips and brown eyes concealed behind a pair of black glasses. He wears a red and white plaid shirt with a red collar and black buttons.

Per his suspect appearances in the first season, Joshua is known to know Latin, eat meatloaf and have asthma. He is revealed to have a cold, eat bananas and have read The Jungle Book. He is noted to eat chili peppers, to be in contact with wolves and speak French. It is learned he knows origami, likes riddles and wears Eau de Wild.

Now 19 years old and the laboratory assistant of the Flaming Eagle Police Department, Joshua is seen wearing a black shirt under a white lab coat that has a blue box with "FORENSICS" sewn in on his right. He is also seen wearing a boomerang necklace gifted by the player.

Per his suspect appearance in his tenure in the agency, it is revealed that he has read the Redmoon-Blade legend, eats foie gras and knows anatomy.

Taste Your Own Medicine

Joshua came into suspicion after the team found the victim and Joshua's father Gregory Blade's mobile phone with texts from him. They informed Joshua of his father's murder, which made Josh weep in tears over his father's loss. Major and the player then proceeded to ask him if he knew about his father's work on animal mutations, in which Josh replied with shock.

Later, the team approached him again after they found a newspaper clipping that mentioned the death of Adrianne Blade, Joshua's mother and the victim's wife. The young student then exclaimed that he blamed his father for his mother's death as she had gone with the victim to one of his science conventions and had not returned as she was killed in a shooting at the same science convention.

Joshua was found innocent after scientist Isaac Wilford was arrested for the murder.

Freedom at a Price

Joshua was suspected for a second time after the player found his ID inside a wallet near the tigers' cage at the Gaulstone Zoo. Joshua explained that he was merely there on a school science trip to enjoy the animals and their environments, as well journalize their experiences at the zoo.

However Major and the player still found him to be suspicious once they found a message from the victim, asking Joshua to meet him in the zoo. Joshua explained that the victim, zookeeper Evan Maxwell, believed Joshua to be cursed and wanted to reverse the so-called curses on him. However Joshua had denied the curse and ignored the victim's pleas.

Joshua was found innocent for the second time after zoo veterinarian Mathilda Alyssa was apprehended for the murder.

A Moon of Blood

Joshua was suspected again after the player and Leigh discovered a note written by him to Major's mother, Marie Redmoon-Bilodeau. Joshua explained how his family had briefly got to know each other when Joshua was a young child moving into the city with his parents. The two families then drifted apart over the years as Adrianne first died and then Gregory. Joshua then told them that he had not seen Marie in years and said he had to check on his younger brother.

Later, it would be revealed that Joshua had omitted parts of the two families' relationship when they found out that Joshua had gifted Marie a pendant as thanks. Joshua said that he gave the pendant to Marie to thank her for babysitting him when he was a child. Joshua then told them that he wouldn't kill Marie as she was kind and caring.

Joshua was found innocent for the third time after Major's father Francisco Redmoon was arrested for the homicide.

Swept off Her Feet

Joshua appeared in the case when his younger brother, Zach Blade, was suspected in the murder of elementary teacher Katerine Grandes. Joshua assured the detectives that he was positive that his brother wouldn't do anything like that, even if the victim disturbed both of them.

Threat from the Past

On Halloween, Joshua, dressed as a zombie, was with his brother, who was dressed as a puppy, when they came to the station to hand out badges of the elections, telling the team to vote for the mayor the following day.

The Thorn Amongst the Roses

To Dare the Devil

Flight of the Bats

The Legends of Reality 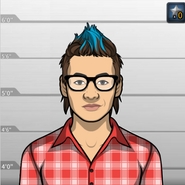 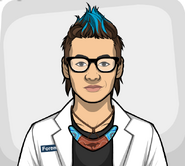 Joshua, as he appeared in The Mystery.
Add a photo to this gallery

As Ethan and Janice were unavailable due to the exposure of the traitor, Joshua took the responsibility of carefully examining and analyzing murdered corpses or necessary physical, biological, and/or clinical analyses, and informing the team of his results after a certain amount of time or a speed-up process using Criminal Case Cash. His task-wait rates varied depending on the difficulty of the task, but they all cost 1 Criminal Case Cash per 30 minutes.

Retrieved from "https://criminal-case-official-fanfiction.fandom.com/wiki/Joshua_Blade?oldid=212692"
Community content is available under CC-BY-SA unless otherwise noted.