Joseph Bitch was a quasi-suspect in Burn in Hell! (Case #11 of Grimsdale), he also made a minor appearance in Life is Short (Case #9 of Grimsdale). He later on appeared again, as the killer of Rani Cohen in The Lake Monster (Case #33 of Grimsdale)

Zoe asked to see the player, she told the player and Diego, that with Ezekiel in prison, Joseph needs a new family to take care of him, but when she approached him, he pushed her and ran off, and asked the team to find him for her.

Diego and the player found Joseph locked in a box, he tried to ru off, but Diego caught him, and they took him to the foster hime, so that Zoe could speak to him.

Zoe came into the purple team cabin, where she informed Diego and Hamilton, that Joseph escaped his foster house, and that he is somewhere at the forest. The duo managed to find Joseph, and made him a suspect due to him settling near the lake. When asked whether he met anyone from camp, he revealed that he only came across Natasha and the victim, Rani Cohen.

Joseph was interrogated again due to him telling the victim to get away from him. He revealed that the victim would not stop flirting with him, and went as far as groping him, despite him telling her constantly he isn’t interested.

Joseph turned out to be the killer. Joseph told the duo that he never meant to kill Rani, and that it was an accident. He explained that he wanted to ride the boat, to calm his nerves, when Rani came up to him, asking him if she could ride with him. He accepted, and took her, but once they arrived to the middle, piranhas came, out of nowhere and starting jumping at them. Rani not wanting to die, tried to push Joseph into the lake, so they would eat him, while she swims all the way to the docks. Eventually, Joseph was stronger than her, and he pushed her to protect himself. Unfortunately, he accidentally pushed her too hard, causing her to fall out of the boat. Joseph wanted to save her, but he saw Matthew approaching, and so he dove in the lake, to hide, and tried to pull her down, away from the piranha, but she was already dead, and so he had no choice but to swim to the docks. Judge Powell sentenced him to 3 years in prison. 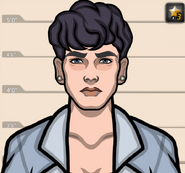 Ezekiel, Joseph’s brother.
Add a photo to this gallery
Retrieved from "https://criminal-case-official-fanfiction.fandom.com/wiki/Joseph?oldid=194876"
Community content is available under CC-BY-SA unless otherwise noted.