Jodie Margaret Is the victim in Acid Digestion (Case #3 of Grimsdale).

Jodie is a 16 year old Fairview High student, who had green eyes, and red hair donned as a bun, and she had freckles on her face.

At the time of her death, she wore a pink striped shirt, under a dark green jacket.

When sent to Autopsy, Hasuro said that she died from digesting Hydrochloric acid, and could not find any traces that could lead to the killer, other than the fact that the victim probably fought her killer, which means the killer is sporting a burn.

The killer turned out to be Pippa Goldfinch, after denying the accusations, she admitted to the murder saying that the victim compared students’ papers with each other, where she realized that Pippa was giving bad marks to student’s although they got the answers right. Pippa confirmed that the victim’s accusations were true, and she’ve been failing certain students in Chemistry because she found them disrespectful and wanted to teach them respect, and not act like brats, Pippa couldn’t risk loosing her job, so she decided to silence the victim. Once the victim left the locker rooms, Pippa hit her head with a stomper, she then brought the victim in the chemistry lab, where she brought a bottle of Hydrochloric acid. The victim woke up and had a struggle with Pippa, leading some of the acid to splash on Pippa’s forehead, but eventually Pippa managed to place the bottle on the victim’s mouth, forcing acid to go through the victim’s throat, killing her. Judge Powell was relieved the killer was not another adolescent, but was disgusted since she expected better for an adult, leading her to sentence Pippa Goldfinch to life in prison with no parole. 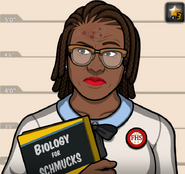 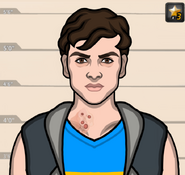 Harry Would, Jodie’s ex-boyfriend.
Add a photo to this gallery
Retrieved from "https://criminal-case-official-fanfiction.fandom.com/wiki/Jodie_Margaret?oldid=109466"
Community content is available under CC-BY-SA unless otherwise noted.