Jennifer McCarthy was the victim in Hit the Sack (Case #2 of Pheadmouth).

Jennifer was a bartender of Happy Irish bar with mostly blond dreads and black eyes. At the time of her death, she has a yellow flower in her hair and she wore a red wool jacket with torn sleeves and a shirt with Soda can who was found at her workplace.

Jennifer was found dead in O'Connell Alley without her shirt. An Autopsy report shows that on her body was signs of caviar, which she didn't had in the organism in the time of her death.

The killer turned out to be Jennifer's ex-boyfriend Seamus Walsh.

Although Seamus denied his involvement at first and accused Jennifer’s current boyfriend Eamon O’Dowd of murdering her, however, he then confessed all things. He told the team that his unmarried uncle had recently left all of his fortunes, including a pot of Irish gold, to him. However, Jennifer accidentally knew the whole things. Seamus said that he heard Jennifer talking on the phone, saying that she wanted to be Seamus’ girlfriend again just to kill him and legally take all the money and gold from him. Being frustrated, Seamus followed Jennifer from her workplace, Happy Irish bar, into O’Connell alley. He then used a sack with rocks to hit her brutally. Judge Park sentenced him to 25 years in prison. 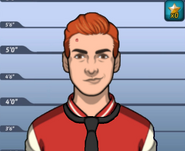 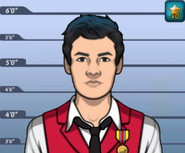 Eamon O'Dowd, Jennifer's boyfriend.
Add a photo to this gallery
Retrieved from "https://criminal-case-official-fanfiction.fandom.com/wiki/Jennifer_McCarthy?oldid=114621"
Community content is available under CC-BY-SA unless otherwise noted.