Jayden Chase is a main character featured in Rusthollow, where he serves as the detective for the Rusthollow Justice Division and one of the player's partners throughout the season.

24 years of age, Jayden has wavy black hair and a 5 o'clock shadow. He is seen wearing a cowboy outfit and a brown poncho with a cactus design on it. He is known to be interested in horses, whiskey and anything Wild West related. He is known to be flirtatious and relaxed but still determined to get the job done.

Jayden met the player at the airport as they arrived in Rusthollow, deciding it would be a good idea for everyone to meet back at the headquarters, Jayden and the player started heading there before finding the body of Scott Bristow, his head smashed in.

The player may choose Jayden to join the investigation of each crime scene (in any Rusthollow case he teams up with the player) and provide hint bonuses. He is available as a 1-hint, level-10 partner. 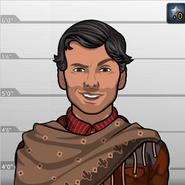 Jayden, as he appeared in Stand and Deliver (Case #18 of Rusthollow) and The Darkness is Here (Case #54 of Rusthollow).
Community content is available under CC-BY-SA unless otherwise noted.