Jason is a 37-year-old boyfriend of Mandy Pregodich. He wears a light blue collared shirt and a black tie underneath his periwinkle buttoned shirt. Additionally, he has a blue "H2O" on his right side.

In his first appearance, it is known that Jason knows the elements, eats chili and believes in astrology.

In his second appearance, it is discovered that Jason knows about dinosaurs.

In his third appearance, it is revealed that Jason knows how to shoot, wears boots and knows ancient history.

Jason was found to be innocent after the team incarcerated Jessy Pinkerton for Walter's murder.

Jason was found to be innocent again after the team incarcerated John McBurns for Jefferson's murder.

Jason was found to be innocent for the third time after the team incarcerated Heydi Gemini for Jack's murder. 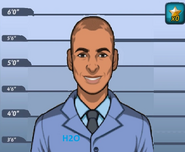 Jason, as he appeared in Safety Last (Case #5 of Patriot City) and Grass is Bloody (Case #6 of Patriot City)
Add a photo to this gallery
Retrieved from "https://criminal-case-official-fanfiction.fandom.com/wiki/Jason_Livingston?oldid=209162"
Community content is available under CC-BY-SA unless otherwise noted.