Prior to joining the team, he appeared as a suspect in the murder investigations of seven different people and a quasi suspect in four cases, along with making nine minor appearances.

Into the Deep End

A Fish in the Net

Die on the Vine

A Snake in My Bosom

A Mountain to Climb

Fall of the Ice Maiden

It All Ends in Tears 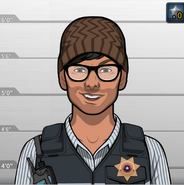 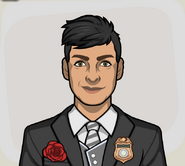 Silvano Macerno, Jason's husband.
Add a photo to this gallery

At the request of the police, Jason performs analyses involving weaponry whenever Vito Panzica is unavailable. He informs the team of the results of his analyses after a certain amount of time or a speed-up process using Criminal Case Cash. His task-wait rates will vary depending on the difficulty of the task, but they all cost 1 Criminal Case Cash per 30 minutes.

Retrieved from "https://criminal-case-official-fanfiction.fandom.com/wiki/Jason_Ashton?oldid=108481"
Community content is available under CC-BY-SA unless otherwise noted.