Jarvis Van Ness is a recurring character in Criminal Case: Justice Department. He was a suspect in five murder cases and as a quasi-suspect in three different occasions,

Jarvis is the 24-year-old entrepreneur who owned Acropolis' main banking facility — Van Ness Finances, and the co-founder of the cryptocurrency InstaDollar. Jarvis is a 6'2 Caucasian man with short brown hair and brown eyes covered by his black thick-rimmed eyeglasses and a 5-o'clock shadow stubble. He usually dons a navy blue blazer over a blue striped business shirt with a white collar and black tie.

In his appearances in the Main Street district, he wears a golden InstaDollar insignia as a tie pin on his black tie.

From the additional investigation of the case "What A Shocker" (Case 58), Jarvis changes his navy blue blazer for a black trench coat, he also appears to have eye bags under his eyes.

[SOON TO BE ADDED] 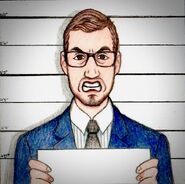 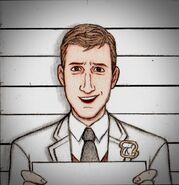 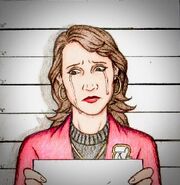 Janet Van Ness, Jarvis' sister-in-law
Add a photo to this gallery
Retrieved from "https://criminal-case-official-fanfiction.fandom.com/wiki/Jarvis_Van_Ness?oldid=104606"
Community content is available under CC-BY-SA unless otherwise noted.