Janet Ling (1996 - 2020) was a suspect in the murder investigations of her ex-boyfriend, chef Louis Marchex in Dock or Duck (Case #11 of Patriot City) and tech expert Leonard Thiff in Cross that Bridge (Case #12 of Patriot City) before being murdered in Crazy Dead Asians (Case #15 of Patriot City).

Janet was a 24-year-old nurse with black eyes and chin-length light brown hair. She wore a red shirt underneath a lab coat with a blue tag saying "forensics" in white letters.

In her first appearance, it is known that Janet eats trail mix, gambles and has a pollen allergy.

In her second appearance, it is discovered that Janet knows how to tie knots, drives an SUV and eats olives.

Janet's friend, Haruki Kato, was in love with her but got rejected, saying that she wouldn't date someone who is overweight. Janet's sister, Kim Ling was infuriated by Janet when she spent all of her money for gambling. Record store owner Jackson Vinyl was angry at her when she disliked the shop's wallpaper. Janet mistakenly thought that Marty Norris was stealing her phone and mechanic Maylin Park used to be friends with her. But when Maylin was hanging out with the wrong people, they ended their friendship.

The killer turned out to be mechanic Maylin Park.

Maylin tried to lie but later confessed. Maylin admitted she killed her for trying to get her an abortion. When she found out that she was pregnant, she told her friends, her family, and her boyfriend about having a baby. However, Janet was shocked by her pregnancy, she told her to get an abortion but Maylin refused. A few months later, Janet sent her cigarettes to let the baby. When Maylin saw Janet across the street, she got an idea to make lots of people flee the building by faking a bomb is in the tower. Making Janet find out how it feels to have an abortion, she grabbed an axe and struck her in the head. Judge Peterson sentenced her to 5 years in prison. 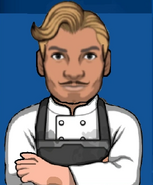 Louis Marchex, Janet's late ex-boyfriend.
Add a photo to this gallery
Retrieved from "https://criminal-case-official-fanfiction.fandom.com/wiki/Janet_Ling?oldid=217413"
Community content is available under CC-BY-SA unless otherwise noted.