Mayor Jackson Harward is a recurring character featured in Harwell, where he serves as the mayor of Harwell.

He was a suspect in the murder investigations of five different people over the course of the season. He also appeared as a quasi-suspect in Unfortunate Turn of Events (Case #24 of Harwell).

Jackson is the 36-year-old mayor of Harwell with blue eyes and black hair. He wears a black pinstriped suit over a white collared shirt with a red tie. He also wears a tiepin and a red pocket handkerchief.

In his first appearance, it is known that Jackson drinks chai tea and uses hand sanitizer.

In his second appearance, it is discovered that he eats donuts and owns a storm survival kit.

In his third appearance, it is revealed that he drinks coffee.

In his fourth appearance, it is uncovered that he handles snakes and uses sunscreen.

In his fifth appearance, it is known that he has a cold and eats meatloaf. 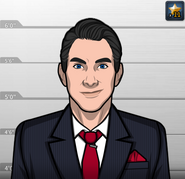 Jackson, as he appeared in Every-Dead Life (Case #7 of Harwell) and Horror Under the Surface (Case #12 of Harwell) 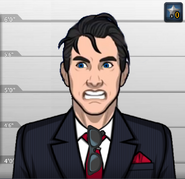 Jackson, as he appeared in One Heart to Burn (Case #19 of Harwell).
Add a photo to this gallery
Retrieved from "https://criminal-case-official-fanfiction.fandom.com/wiki/Jackson_Harward?oldid=143709"
Community content is available under CC-BY-SA unless otherwise noted.