Jack Archer was a killer of British Prime Minister Jeremy May in Rain on Your Parade (Case #6 of Save The Europe). Prior to that, he appeared as a suspect in a murder investigation of WDD agent Elvio De Jesus in How to Commit a Perfect Crime? (Case #2 of Save The Europe)

Jack was a 27-year-old World Defense Department  agent with light brown quiff hair and brown eyes. Before his death he was seen wearing his everyday blue button-up shirt with striped collars. He is also normally seen wearing his typical orange-tinted sunglasses and carries a brown jacket over his shoulder.

In his first appearance It is discovered that Jack eats sunflower seeds and uses hand sanitizer.

In his second appearance, he had a blood stain on his clothing and it's discovered that Jack suffers from insomnia, eats steak and plays Counter Compassion.

How to Commit a Perfect Crime?

Rain on Your Parade 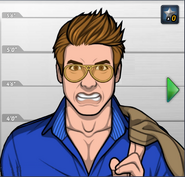 Jack, as he appeared in How to Commit a Perfect Crime? (Case #2 of Save The Europe) 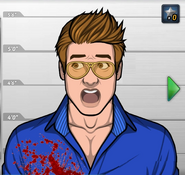 Jack, as he appeared in Rain on Your Parade (Case #5 of Save The Europe)
Add a photo to this gallery
Retrieved from "https://criminal-case-official-fanfiction.fandom.com/wiki/Jack_Archer?oldid=127982"
Community content is available under CC-BY-SA unless otherwise noted.