I Want You to Die is the first case of the Criminal Case collaboration The Lone Enemy. It takes place in the city of Nefarion in the country of Halcyon.

At the beginning of the case, it was revealed that Owen Stanford, the Deputy Director of the Central Intelligence Agency, had discovered that someone's planning to destroy everyone's lives in the country of Halcyon. Therefore, he ordered Diana Hudgen's team, Gunmetal Resistance, to stop this danger.

With the help of Brant, who's the brilliant hacker of the team, they intercepted a phone call from the enemy and found out that he's recreating one of the deadliest storms in history, the Hurricane Katrina. They discovered that he's using a group of scientists to create the storm. Brant traced the phone call and found out that he's located at the back of the storage facility, thus Diana ordered Thom and the player to head there immediately.

Unfortunately, they didn't saw the enemy there but rather the dead body of Keith Blanco, who's working as a waiter at a restaurant in the district. Thom found out that Keith, who was actually a CIA agent, was sent by Owen to find out more about the enemy's plan. Later, the team decided to hack into the computer systems and discovered that the enemy purchased a set of nuclear bombs.

During the investigation, four suspects were flagged: the famous actor, Vince Marini (who witnessed the murder), the victim's friend, Kathleen Davis (who lost her watch in the facility), the young immigrant, Francis Entela (who talked to the victim before his death) and a rich young man, Daniel Martin (who's a relative of the victim).

At the end of the investigation, the team found enough evidence to incriminate Kathleen Davis for Keith's death. Confessing to the murder, Kathleen said that the enemy told her to murder Keith. She told the team that the enemy wanted him dead so that Keith may not find anything about his plan. When Thom asked Kathleen who the enemy was, she did not want to tell his name. As a result, Judge Alice Bautista sentenced her to 12 years in jail.

Following Kathleen's arrest, Daniel Martin approached the team and told them that he thinks someone is spying on him. With the help of Brant, they headed to the storage facility which was Daniel's last location. The two discovered a surveillance photo of him with the caption: "I want you to die!" After sending the photo to Elise, she told that someone is planning to kill Daniel. Brant told him all about the photo and suggested that he should stay somewhere safe.

Back at the headquarters, the team congratulated the player for solving the case of Keith's murder. However, Diana interrupted them saying that someone died trying to go to the Halcyon Medical. The team decided to head to the hospital to find out more about it.

Daniel Martin
Add a photo to this gallery 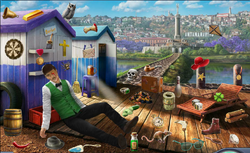 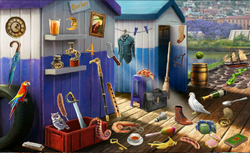 Storage Box
Add a photo to this gallery

Retrieved from "https://criminal-case-official-fanfiction.fandom.com/wiki/I_Want_You_to_Die?oldid=60814"
Community content is available under CC-BY-SA unless otherwise noted.