Hamilton and Diego were with Mia, at her house. Hamilton then gets a call from Vicky, who was crying hysterically, telling him that her father was killed. Hamilton was shocked and told Diego to come with him, but Mia stepped in and made up her mind that it’s time for her to get back to police work. Hamilton and Mia headed to Hyrum Lopez’s mansion, where they found Hyrum dead in his study, with a dart on his neck.

After collecting enough evidence, Mia and Hamilton went to arrest Steve for the murder of Hyrum Lopez. When Mia and Hamilton came to confront Steve, he smirked and admitted to the murder, claiming that he did it as a distraction for them until “we gather up”. Mia and Hamilton were confused, until Diego came panicking saying that there are over 50 people surrounding the station. Mia and Hamilton went outside the station, where they saw everyone who was inside it, including Mira and the suspects of the case (except Kelemen and Vicky), being faced by armed people. The duo then looked at Steve, who laughed and revealed himself as the Anoterous leader, and told them that they fell into his trap. Steve then told his people to capture the team, before he left the area and escaped. The team then entered the station and started panicking, but then, they fell asleep. Hamilton and the rest of the team, woke up where they saw that the Anoterous members that surrounded the station, were tied up and caught Kelemen looking at himself on Nyane’s mirror. The team were about to arrest him, but he pulled Mira’s hand and chanted greek words on the mirror he was holding, where he and Mira suddenly disappeared.

Hyrum became a suspect, after the team discovered he had been in the clubhouse. When spoken to about the victim, he revealed that he met her, and that he knows her name. He revealed that he usually doesn’t usually care about kids who interview him for the honor of talking to a well-known criminal, but Bethany managed to come to his interest, die to her dating his daughter’s ex. With hearing this, the team gave Vicky another talk.

Hyrum is seen at Armie’s trial, yelling at the killer, due to him hearing that his intentions were to rape his daughter and not killing Bethany.

Jones heard about Armie being a suspect in the investigation, and told Hamilton and Diego to look more into him. The duo then dicovered that Hyrum us planning to run for mayor, leading them to give him a talk. He told the duo, that he isn’t planning for anything bad, and just wants the best for Grimsdale.

After searching the sniping area, Diego and Hamilton found Gilly’s phone, when they unlocked and sent to Clay. Rozetta sat next to Clay, who told her and the duo, that in the notes section of the phone, Gilly listed the name of the targets she is supposed to eliminate, with the reason why they should be killed. Rozetta then told the team, one of the targets was Hyrum Lopez, who is listed as Ex-Anoterous member. Diego and Hamilton went to confront Hyrum, who told them that he wasn’t actually an Anoterous member as he was only a son of a demigod, and was only an ally for them, but he decided to ditch them. Diego then warned him, that The Anoterous were after him, but he showed no fear, saying that he has well-trained bodyguards to protect him.

Life With No Money

Hyrum was made a suspect after Randall told Hamida and Hamilton, that the victim was spotted leaving Hyrum’s home. When speaking to Hyrum, he revealed he have heard the news, and was saddened by the victim’s death, giving Hamida and Hamilton permission to investigate his study.

He was spoken to again, after learning that the victim was an Anoterous ally, and suspected he was planning to hurt Hyrum. Hyrum was shocked by hearing this, and was angry at the victim that he thought he’d be strong enough to kill Hyrum. Hyrum was revealed to be innocent, after Alejandro Zamora was incriminated.

Hyrum caught Diego and Hamilton searching his office, and demanded an explanation. The duo then told him that they are planning to forge dollar bills to swap the money that the Anoterous stole with the fake bills, in order to make a prank on them. Hyrum liked the idea, and offered to forge the bills himself.

Cut me off your Life

Hyrum became a suspect, after Diego and the player learnt his location, which was at Sarah Cardwell’s house. The duo interrupted their “meeting”, to speak to Hyrum, where they informed him that Vanellope Bloom was murdered in estate. When told of this, he didn’t show a drop of sympathy toward her, and even criticized her parenting skills.

Hyrum was spoken to again, after learning that the victim pulled a lawsuit again. However, Hyrum wasn’t scared of it, since he knew that he’d most likely win. He was revealed to be innocent after Chelsea was incarcerated for the crime.

Hamilton and Mia went to speak to Hyrum, to see what’s wrong. Hyrum explained that after Chelsea’s arrest, Vicky went to Hyrum and begged him to release Chelsea out of prison. Unlike Julian, Chelsea was 18 during her arrest, making bail impossible, and that he has to hire a lawyer and hope that she wins the case, but seeing that she sent the leg to the husband and son, that would be unlikely, and so he refused. He and Vicky ended up arguing, unlike Vicky gave up and went to her room, and started crying. Hyrum felt bad for his daughter, and asked them to speak with her.

Hyrum became a suspect after the duo found his ring at the election podium, which he threw away. Hyrum showed sympathy towards Charles for his death. He later on, came up to Hamilton and Hamida, telling them that Katherine Votjka have been shot.

After Katherine was sent to the hospital, the duo went to him, to ask him what he was doing in the blue party offices, in the first place. He assured the duo he wasn’t sabotaging Sarah’s campaign, and that it’s for a personal reason. He was revealed to be innocent after Katherine was arrested.

He us later seen at the stage, where the mayor was announced to be his competitor, Sarah Cardwell, where he shook hands with her.

Hyrum was spoken to again after a zero dollar check he sent to the victim was found. Hyrum told Diego and Hamilton that when Dana asked for them to get back together, he didn’t hesitate to do so and broke up with his previous girlfriend thinking it was best for Vicky, but sooner he discovered that Dana was only doing that because she wanted money as she was penniless. 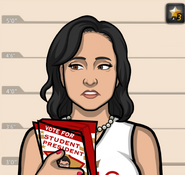 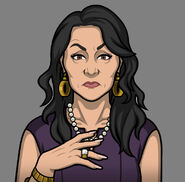 Dolores Zamora, Hyrum’s ex-sister-in-law
Add a photo to this gallery
Retrieved from "https://criminal-case-official-fanfiction.fandom.com/wiki/Hyrum_Lopez?oldid=207598"
Community content is available under CC-BY-SA unless otherwise noted.