Helena Hartmann is a main character featured in Season 2 of Criminal Case, appearing as the Stonemoorian Justice Enforcers's Field Expert.

She was a suspect in the murder investigation of her sister-in-law, politician's assistant Rosalie Hartmann in Under the Full Moon... (Case #48 of Stonemoor) and beat cop Todrick Cole in The Balance of Power (Case #60 of Stonemoor).

Hailing from Frankfurt, Germany, Helena is the 29-year-old Weapons Expert who was previously an airline pilot prior to her tenure in the Stonemoorian Justice Enforcers. She has a pair of silver goggles over brown hair tied into two separate braids, brown eyes, pink blush and pink lipstick. She is seen wearing a white collared shirt with black buttons and a yellow pinstripe ascot under a navy blue blazer with golden yellow linings and grey sleeves. She also has a golden yellow rose with a grey ribbon on her right and a clover brooch on her left.

All Roses Have Thorns

After arresting Maria Leroux for the murder of Michael Stern, Helena asked to speak with the player about her brother. Helena confessed how disappointed she was to see her brother this way, revealing that Daniel had always been extraordinarily gifted. The pair then spoke to Daniel who confessed that he wanted to change. Helena and the player then spoke to Maria in prison about her rehabilitation scheme she'd organized back in Lake Town. With Maria's rehabilitation scheme, the pair spoke to Daniel once more who agreed to turn his life around.

After the arrest of Scott Lawrence for the murder of Kayla Sistine, Helena requested the player and Spencer's help with getting her brother, Daniel, back into politics. After headng to the Smoky Gears cafe to find a speech Daniel had written when he was younger in Helena's bag, they gave it to Daniel, who was inspired to restart his old passion. 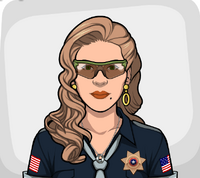 Wendy Hartmann, Helena's sister.
Add a photo to this gallery

Retrieved from "https://criminal-case-official-fanfiction.fandom.com/wiki/Helena_Hartmann?oldid=200317"
Community content is available under CC-BY-SA unless otherwise noted.