Have Fun Til’ It Ends is a case featured in Criminal Case. It takes place in the Los Muerta district of Grimsdale.

Concerned on what may have happened to Gail, Diego and Hamilton decided to ho to the “Fuck-Strip-Drink” nightclub. When they arrived, they saw Gail dancing with Aiden Evans, like a maniac, looking high af. Realizing that Aiden wasn’t enjoying the dance, the duo pulled from Gail, who continued dancing, going to the poles, where she pushed a dancer down the stage, and started pole dancing. Many people were watching and started throwing money Gail, until she passed out.

Diego and Hamilton rushed to Gail’s aid’ who unfortunately, died from exhaustion. The duo found it suspicious that she hung up on them shortly after learning the Anoterous’ leader identity, and assumed that someone must’ve drugged her, meaning she was murdered. As a result they started investigating, adding Aiden Evans, Nyane Jenkins- Liveman’s highest paid stripper and DJ Kalua Kaboom. While recapping the case, the duo were surprised by Diego’s sister, Ashley, approaching them.

Ashley explained to Diego and Hamilton that she saw Gail entering the nightclub’s security room, before she went wild. The duo decided to investigate the security room, as well as add Ashley along with the “Fuck-Strip-Drink”’s owner to the suspect list. Additionally, they found out that Gail threw a can of coke at Nyane while performing telling her that she’s too skinny and that she should gain weight, and that she also asked Kalua out and when she refused, she yelled at her and threatened to spread a false rumor on claiming Kalua’s a homophobe. Diego and Hamilton then decided to have a rest, until Diego saw his sister on stage, hitting fetishists in their groins.

Diego and Hamilton pulled Ashley out of the stage and started scolding her, before getting back to the investigation, where they soon found out that Gail attacked Ashley’s boyfriend for simply touching Ashley’s hand “without her permission” and that she accused Aiden of calling her “ugly and fat”, for not apparently flirting with her while having a civil conversation, and led a group of men to beat him up for “mocking her”. Furthermore, they found a footage of Gail accusing Steve of assaulting her, when all what he did was greet her. The killer turned out to be Nyane Jenkins.

After being confronted with evidence, Nyane confessed to the crime. Nyane told Diego and Hamilton that she knows about Gail’s ability to sense and detect demigods, and then she to the duo’s surprise revealed herself as the Anoterous’ leader, and that she drugged Gail to protect her identity. Diego and Hamilton were unconvinced by the fact that Nyane is the Anoterous’ leader, but they certain that one thing she said was true: She killed Gail to protect the leader’s identity. Nyane was sent to Judge Powell, who despite the fact she also disbelieved Nyane’s motive, sentenced her to life in prison for murder and messing up a police mission.

After arresting Nyane, Diego and Hamilton decided that they should go and investigate the security room to find out whether she was lying about her motive or not. Ashley and Julian Ramis then came to Hamilton, asking for his assistance.

Hamilton went to speak to Ashley to see what she and Julian want from him. Ashley explained that she and her boyfriend, Julian, have developed a remix for a song, which they were hoping Kalua would use at the party, but unfortunately, Julian ended up losing it. Hamilton and Ashley then searched the dance floor where they found a broken disk. Ashley panicked, but lucky for her, Hamilton fixed the disk and then gave it to Rozetta, who recovered the data inside it. The two then went to Kalua and gave her the disk, where she agreed to use it at the party.

Diego and Hamilton investigated the security room, where they found a bag, with Nyane’s name on it. After searching the bag, they found a mirror which for some reason, Hamilton felt a magical aura surrounding it. Suspicious of the mirror, the duo gave it to Rozetta, who told them that this mirror is something that Aphrodite gifts her children, when she feels that they are worthy of it and that they could use it to go to anywhere they want by giving it commands. This made Diego and Hamilton realize that Nyane was a daughter of the beauty goddess, and since the Anoterous’ leader is a child of Zeus, there was no way they are Nyane. The duo confronted Nyane over this discovery who confirmed that she did indeed lie, but refused to give them a hint on who her leader is. Seeing that one of his employees is a member of the Anoterous, as well as the fact that his brothel was used to hide two other members, Diego and Hamilton decided to confront Steve, who denied being the Anoterous leader or having any afflictions of the Anoterous.

After they’re done with everything in their hands, Diego and Hamilton decided to party at the nightclub, where Hamilton got so drunk, his vision started becoming hazy. The next morning, Hamilton woke up and realized that he was laying on a bed in a room that looked the ones in the “Fuck-Strip-Drink” brothel. He then turned next to him, and realized he was sleeping next to Julian Edward Ramis....

Steve Liveman
Add a photo to this gallery 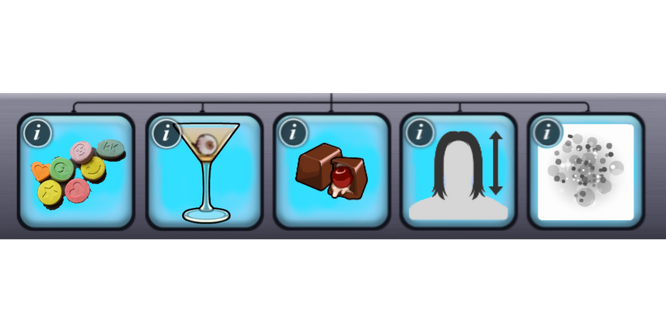 Retrieved from "https://criminal-case-official-fanfiction.fandom.com/wiki/Have_Fun_Til%E2%80%99_It_Ends?oldid=206884"
Community content is available under CC-BY-SA unless otherwise noted.