Hasuro was a 25-year-old detective with blond hair and brown eyes. He wore a white collared shirt underneath a black suit as well as a badge and a glasses.

In his first suspect appearance, Hasuro had a rash on his forehead. It was known that Hasuro rode a bike and was a trained fighter.

In his second suspect appearance, it was discovered that he knew physics and astronomy and had read an alien book.

In his fourth appearence, he wore a purple leather jacket and a gold chain.

Run in the Blood

As High as Sky 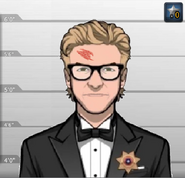 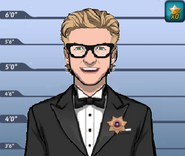 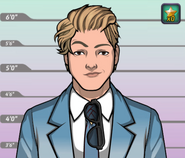 Hasuro, as he appeared in Give it a Whirl (Case #13 Return to Laroy Bay). 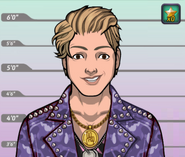 Hasuro, as he appeared in As High as Sky (Case #15 Return to Laroy Bay).
Add a photo to this gallery

Retrieved from "https://criminal-case-official-fanfiction.fandom.com/wiki/Hasuro_Haku_(LB)?oldid=204987"
Community content is available under CC-BY-SA unless otherwise noted.