In Death Falls on Deaf Ears Harold came in to the police station to complain how the police were treating his son and told them about the Commissioner's secret room. 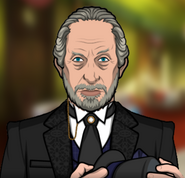 Harold, As he appeared in On the Doorstep..., The Hanged Gang, Burning Rivers, Visual Death, Never Mind the Buzzed Off, Seeing Double? and A Rotten Series of Events
Add a photo to this gallery
Retrieved from "https://criminal-case-official-fanfiction.fandom.com/wiki/Harold_Looper_Rochester?oldid=75621"
Community content is available under CC-BY-SA unless otherwise noted.