Grimsborough Justice Squad is a fan-made series of Criminal Case, as well as an alternative version of season 5.

Grimsborough has three superheroes in town willing to protect the city and serve justice, but now they are facing a big threat! Could they save the day like all heroes do?

4. "The Young And Misguided"

9. "The League of Darkness" 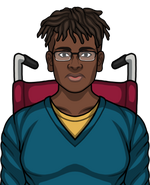 Louis Leroux
Add a photo to this gallery
Retrieved from "https://criminal-case-official-fanfiction.fandom.com/wiki/Grimsborough_Justice_Squad?oldid=186336"
Community content is available under CC-BY-SA unless otherwise noted.